A Night On The Lam, bicycle touring in Florida 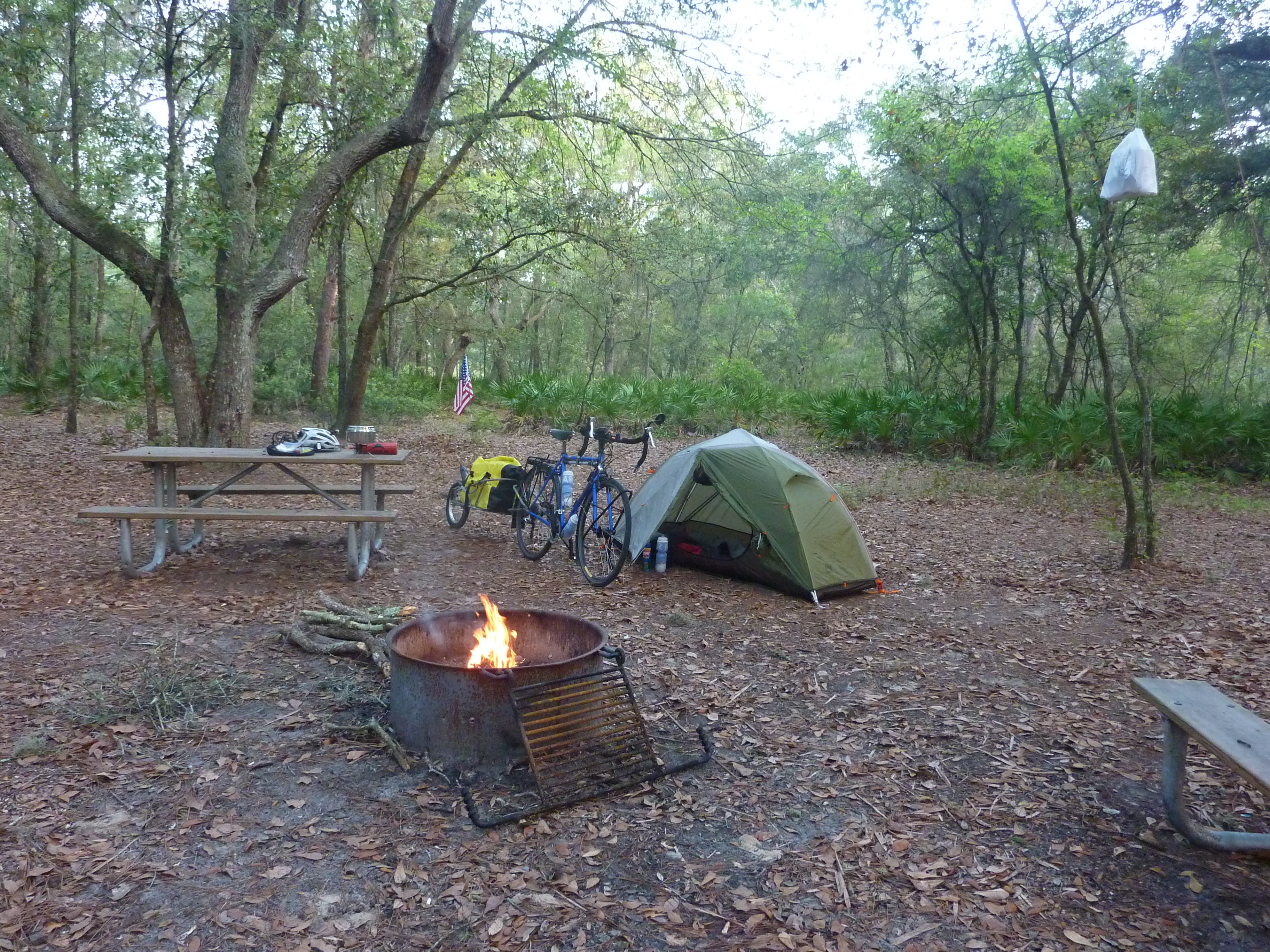 20 Mar A Night On The Lam, bicycle touring in Florida I have been itching to get out for an overnighter for several weeks, so I decided to pack up and do it. However, instead of driving home after work and grabbing the bike and then heading out, I took my gear to work, so I could ride straight from my cube! There were several reasons for going this route:
1 – It would give me more miles.
2 – I could spend more time on my bike.
3 – Not that I care what you drive, but I wanted to show the poor saps stuck in their cars during rush hour traffic that there were other ways of getting around!
4 – It added to my sense of adventure, riding from a very congested urban environment to a nice and quiet semi-country setting.

Just before 16:00 (that’s 4:00 PM for some of you!) I recruit a colleague’s help in getting my gear downstairs and outside. I’m out and rolling! Tonight’s destination is Serenova Tract, 6533 acres of wilderness owned by SFWMD located near SR 52 & Suncoast Parkway. Lucky for me, my route will take me near my house and I say, “Lucky” because I forgot something that I will need for the night. The ride from work to the house was pretty much uneventful; however, I did come across 6 cyclist loaded with gear heading the other direction. After a quick pitstop at the house, I’m rolling again and for the most part the heavy traffic is now behind me. About 45 minutes later I enter Starkey Park and it’s smooth sailing from here. The next 13 miles will be without automobiles aiming for me! Yep, nothing but deer, armadillo, and the rising of the, “Super Moon.”

Somehow I mismanaged my time because I arrived at Serenova Tract after the Sun set, so it’s dark and I’m not sure where the primitive sites are. No worries as I head into the dark woods … well other than the thoughts of Jason from the Friday the 13th movies coming out and chopping me up into little pieces. All is well because about 3/4 of mile in I come upon a group of Scouts camping in the group campsite. I ask one of the Scout Masters if he knew where the primitive sites were and he wasn’t sure either, but he believed they were further back another 2 miles. I’m thinking, “Great, I just rode 47 miles, it’s dark, and I might have another 2 miles on dirt roads, only to be killed by Jason!” Luckily, the Scout Master was wrong, the primitive sites were about 200 meters down the road. By now the “Super Moon” if fully up and shinning bright as ever through the trees. After picking my site, I set up camp – living quarters (tent), collect wood, start fire, and make chow. After chow, I do some Suduko and then it’s lights out.

Before I know it, the Sun is up and it’s time to get moving. After getting out of the fart sack (sleeping bag), I get the fire going, make a cup of Joe (coffee), and eat some breakfast before packing up and heading out. Life Is Good!