Bicycle touring in Florida: about Country Roads and Doggy Ricksha, 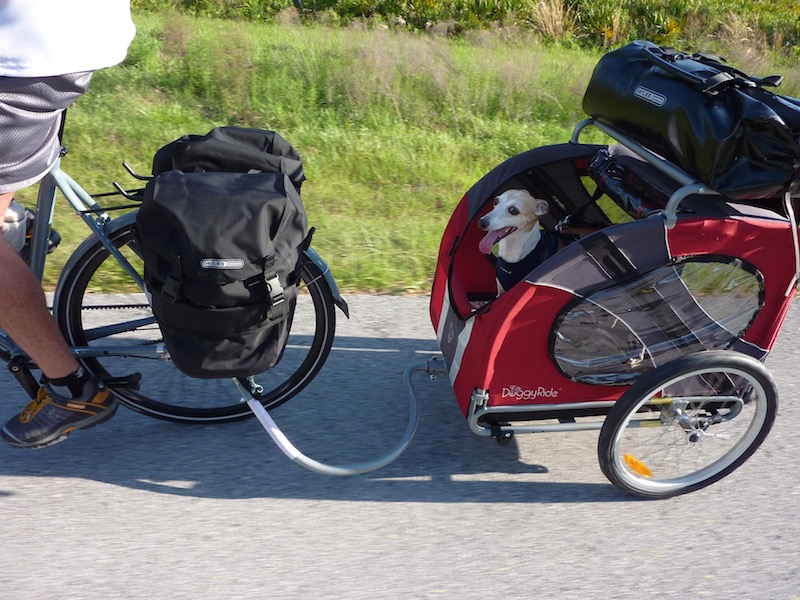 Seems like we are not the only ones enjoying these little weekend bike tours. Although bicycle touring in Florida is not such a big hit. It looks as if our little group keeps growing bigger with each little adventure we are taking on; and since we really like sharing some of the fun we absolutely enjoyed having everybody come with us this last weekend. In all there were seven of us riding and one lucky dog that came along for the ride in his very own rickshaw. The original plan was to leave the house Friday night, and stay the night again at the Serenova tract, which we ended up doing. However, the next day was supposed to get us to Inverness to camp out at Ft. Cooper State Park.  Unfortunately, we found out that we were not allowed to take dogs there, which forced us to change plans. We still rode up the Suncoast and pedaled our way over quiet rural country roads, with a few nice rolling hills toward the Withlacoochee Trail.  This is where Zach, Sam’s son, met up with us to head to the Silver Lake campground at the Withlacoochee State Park. Quiet country roads along our route

Once we set up camp, we decided to make up the missing miles by riding up to Floral City for the famous “Shamrock Burgers.”  Not only did they have great burgers to offer, no–we also found out that they have one of our favorite German Beer (Erdinger Hefeweissen) — we are ready for some good times!  After we filled our stomachs and got well “rehydrated”, we started heading back to camp. However, not before we fixed Ron’s third flat tire for the trip. Somehow, Ron must have taken a voodoo-tire with him on this trip, because even though we all heard air escaping as soon as he tried pumping it up, it didn’t really seem to have a leak anywhere, no matter how often we checked the tube there was no puncture to be found… and then, for some strange reason it suddenly decided to hold air. Once back at the camp, we enjoyed sitting by the camp fire for a little while before crawling into our tents for the night.

Taking a break during our Florida bike tour

The next morning came quickly. Since we wanted to avoid riding during the hottest time of the day, we decided to leave early. So after a cup of Joe and breakfast we quickly packed up camp and headed north on the trail towards Istachatta to drop off Zach with his Mom.

Afterward we followed our originally planned route back home. The scenery was great while our path led through more rural areas, over quiet country roads to Brooksville, and eventually back on the Suncoast. We were very pleased with the routes we found to connect the Suncoast with the Withlachoochee Trail. For the most part they were quite scenic, with little traffic, and we even had some shade. We were also quite impressed with our new “Pedal Partners”, Randy, Jessica, and Zach. Zach just got his brand new bike and rode along with us for more than 40 Miles…good going!!

Our group keeps growing and growing

Not only was this the longest ride for Jessica it was also the first fully loaded ride on her new bike. It seems that she is very happy with her Surley and she did a fantastic job carrying all her own gear and still keeping a smile on her face after a long weekend in the saddle.

Randy probably had the toughest job on this trip. Not only was it his longest fully loaded trip, he also pulled his best buddy in a doggy trailer behind him which is not an easy task in hot, humid Florida.