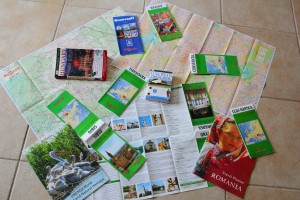 Checking the Maps[/caption] Less than two months to our summervacation, and we realized we still have a lot of things to do to get ready. Since it is raining today and neither one of us feels like 'training' in the rain, we decided to do some prep work.
26 June, 2011 / 0 Comments

With summer quickly approaching it means vacations are just around the corner.  In order to help us get into the planning and travel mode, we were going through some of our past touring albums and we decided to recycle them for your reading pleasure.
27 May, 2011 / 0 Comments

It only took us a few extra months, but we finally put together a few webpages highlighting our most recent bicycle tour through Czech, Poland, Slovakia, and Hungary. We've added a small sample of photos for you to view, information about the places we stayed...