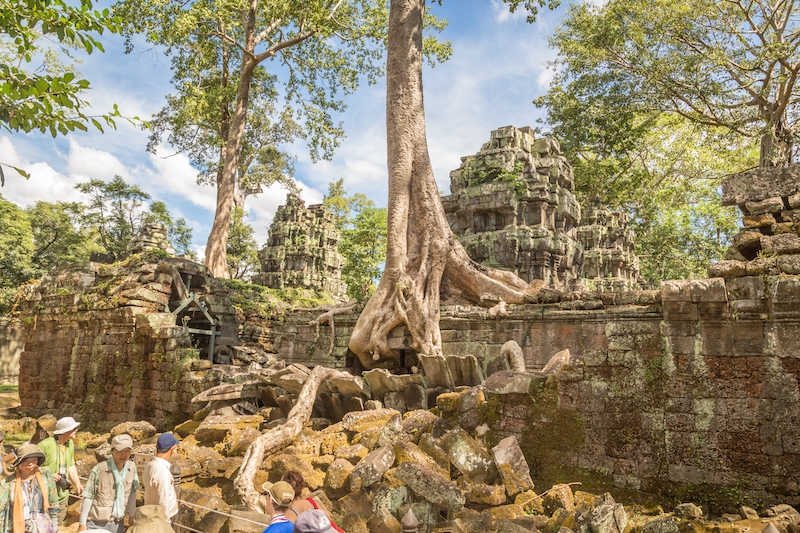 Posted at 05:08h in Cambodia by Petra 4 Comments
0 Likes
Share

Although, we really wanted to see the sunrise at Angkor Wat, we just could not get ourselves to get up that early again. Instead, we decide to take a tuc-tuc back to the temple complex. Since Randy had a late start yesterday, due to a long night out on Pub-street the night before, and only saw Angkor Wat while we discovered all of Angkor Thom and then some, we figured it would be best to start with the temples that neither one of us saw yet. So our nice tuc-tuc driver takes us along the route to the famous Ta Prohm Temple.

Unlike most of the temples of Angkor, Ta Prohm has been largely left to the clutches of the living jungle. With its dynamic interaction between nature and man-made art, this atmospheric temple is a favorite for many – who can’t help but feel a little like Indiana Jones or Lara Croft (which was filmed here) as they pick through the rubble.–Sacret-destinations.com 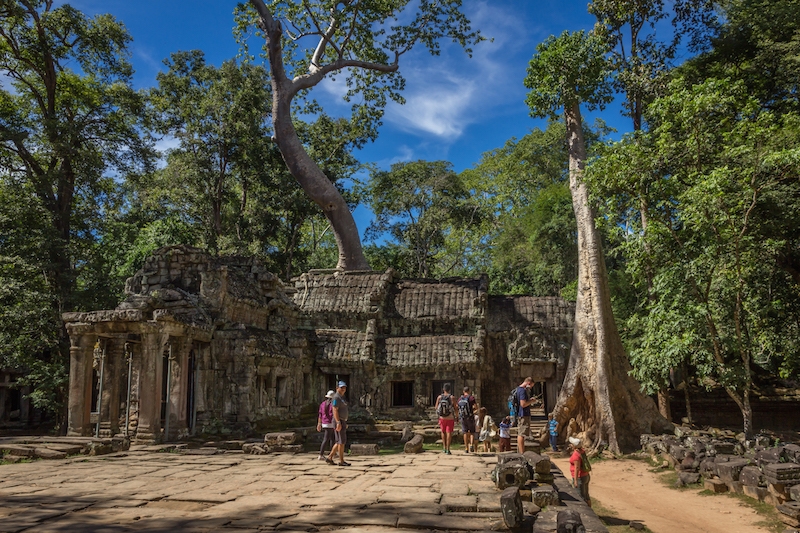 The giant, beautiful trees at Ta Prohm are equally destroying and supporting the ancient structures. Although the enormous roots bore into every niche and crack of the ruined temple, the entire root system though puts a protective spiderweb over the crumbling rocks, preventing them from collapsing entirely.

We spend a long time admiring Ta Prohm and several smaller temples. Many of them look alike, a few though are catching our attention, like one that is built in the middle of a huge man-made lake and is only reachable over long narrow wooden bridge.

At a few sites we listen to small groups of men playing Khmer music. These are no ordinary bands. They are formed by mine-victims. It is a sad history of dictatorship and military conflicts, which left the country riddled with UXO’s and land-mines. Although, most of the hidden explosives have been cleared in the past, many people still are affected by land-mines. Much farmland is still contaminated and they have left thousands of people with limb amputations, blindness, and other ailments. Especially playing children and poor farmers are affected.

According to the Landmine Monitor 2011, Cambodia still contains over 700 square miles of UXO-contaminated land. That’s an area roughly the size of the entire city of London.

The Cambodian Mine Action Center (CMAC) estimates that 4 to 6 million mines exist within the country , though others estimate much higher numbers.

Over 40,000 members of Cambodia’s population. , including many children, have lost limbs due to landmine explosions, according to UNICEF. The number of landmine-related casualties in Cambodia has decreased in the last ten years, but still remains one of the highest in the world. – See more at: www.magamerica.org/blog/cambodia-landmine-facts#sthash.LFZxy79F.dpuf

Since the country is poor and the government is still corrupt, most of the land-mine victims get little to no support. Usually their only option is to beg on the streets to survive or to support their families. Many victims have come together in hopes to protect their dignity, humanity, and pride and have formed these music groups so they would not have to resort to begging. They have pretty much turned into an organization and play and sell music at many of tourists sites.

While walking past the groups, I can not help but wonder, how these people manage. Some are blind; many are missing a limb. The very few prosthetics I can spot look heavy, ancient, and many are broken. It makes me wonder, how many of the “outdated” or outgrown prosthetics that are discarded and unused at home, would be of great help here.

We do all we can do for the moment and donate to the music group, before climbing back into the tuck-tuc, to head to the final destination of the day: Angkor Wat.

Angkor Wat is the best preserved example of Khmer architecture in Cambodia and is so grand in design that some rank it among the seven wonders of the world. It appears on the Cambodian national flag, a very rare instance of a flag incorporating an image of a building.

Originally a vast Hindu temple complex, Angkor Wat–the “City Temple”–eventually fell to invaders and receded into the jungle, where it continued as a Buddhist-temple and was largely forgotten until the 1800s. It is hailed as the best preserved and most important temple in the complex. Yet, after seeing Bayon, Ta Prohm, and several of the other temples, we are a little bit disappointed by the very clean, very intact structure. It somehow seems a little bit too perfect for us.

Since it is hot, humid, and all of us feel drained, hungry, and thirsty, we decide to call it a day. After grabbing a bite to eat, we head back into Siem Riep.