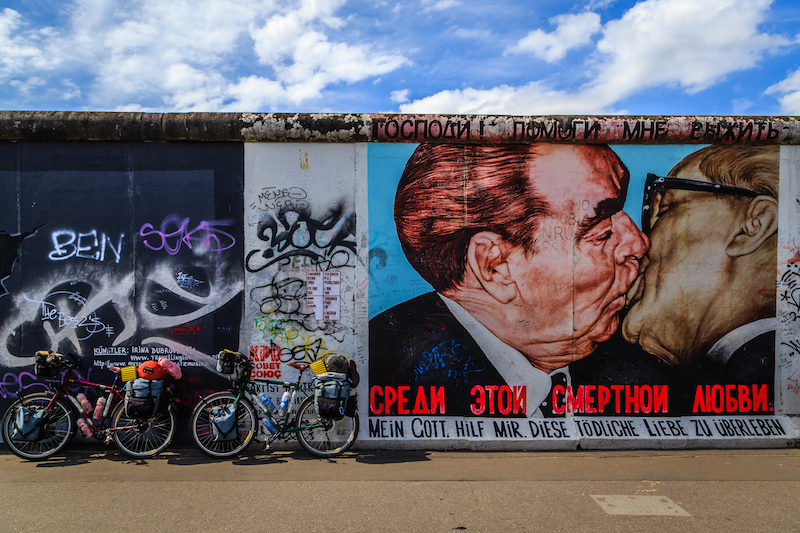 Posted at 08:35h in Germany by Petra 0 Comments
0 Likes
Share

Here goes another day of long cycling miles to get closer to Berlin. Our long distance cycling path continues to lead us through several more villages as the weather is starting to deteriorate. Before we know it, it looks like a major storm is brewing all around us. The wind picks up, the air feels cool and wet, and the people in the villages give us a few pitiful looks, as to say…You are about to get soaked, aren’t you going to get some shelter?! 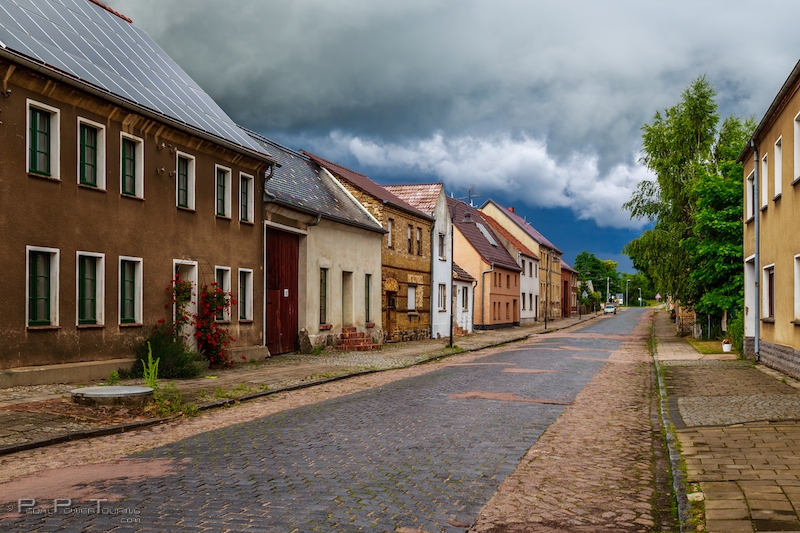 The storm is brewing on our way to Berlin

As it starts sprinkling, we quickly find a covered bus station at the end of a small town to change into our rain gear and to eat a quick bite, before continuing our cycling to Berlin.

Wedding Mill. Cute windmill along our way where couples get married

Since the route is not always marked very well, we manage lose it every once in a while, but miraculously we continue to find the same route again several miles down the road. It appears, that several long distance bike paths are leading into Berlin from all around Germany and merge around this area, so it can get a little bit confusing at times as to which bike-path-signs to follow. 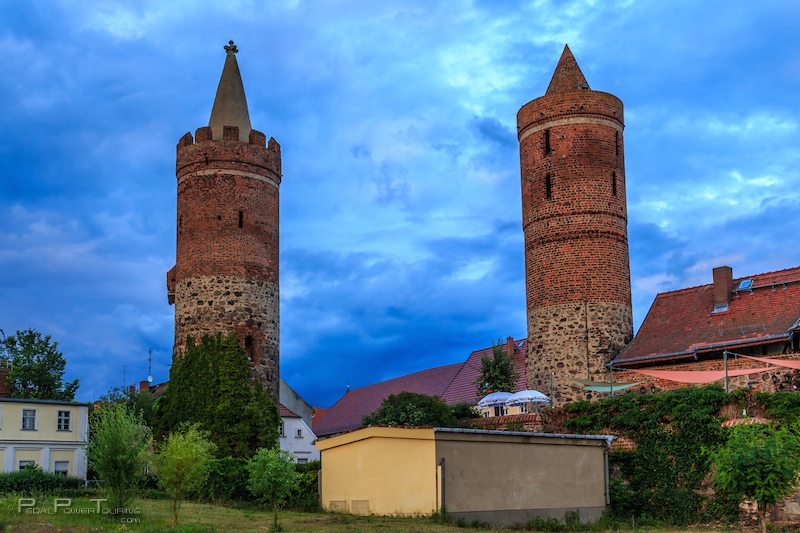 passing through another interesting town along our path to Berlin

Most of the route follows paths that are designated for bikes only, and when it happens to share the road-way, the roads are usually very quiet with hardly any traffic in sight.

There are also a few new looking shelters along the bike paths for tired cyclists or hikers. As it is getting dark, we find ourselves on a piece of bike-path, which was actually closed off due to some minor construction. Since we don’t really know which other route to take and are tired from all the cycling and enduring the nasty weather all day, we decide to follow the path anyway. The path was newly paved and a couple of miles in we spot another cute little shelter, which we decide to call home for the night. It has just enough room for all of our belongings and the mosquito net to sleep under…perfect! 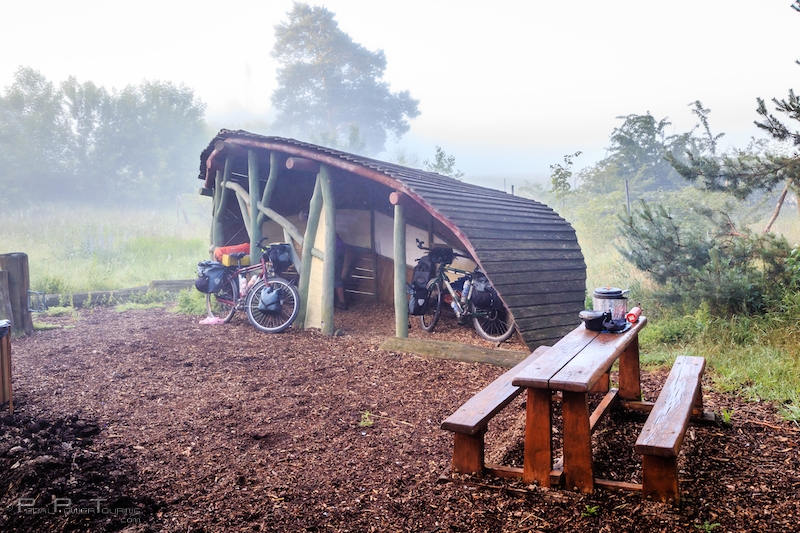 The following morning is still wet and foggy, but at least we knew we would make it to Berlin today, that was enough motivation to get going after a cup of hot coffee. 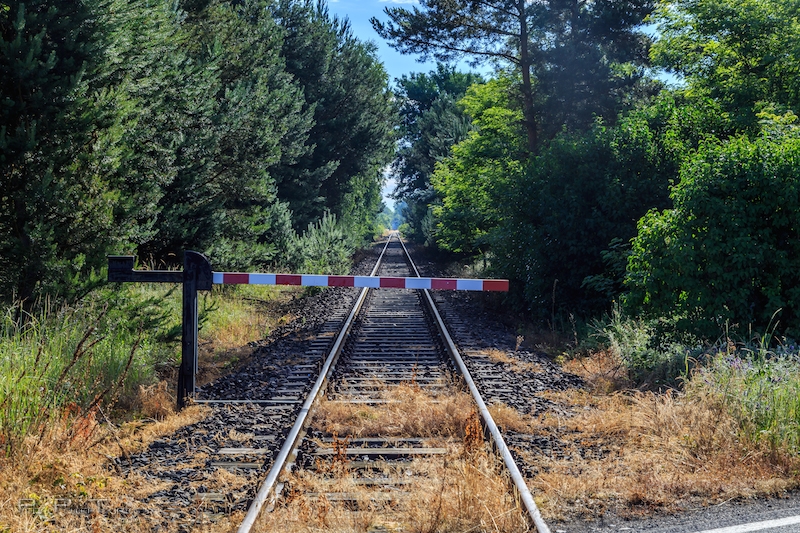 Not sure whether this barrier is supposed to stop the train or cars?!

Ron had been to Berlin in 1990, just as the wall was crumbling, and was able to visit the Eastern side, when it was still officially under Soviet occupation. He was very curious to see how much it had changed since then. 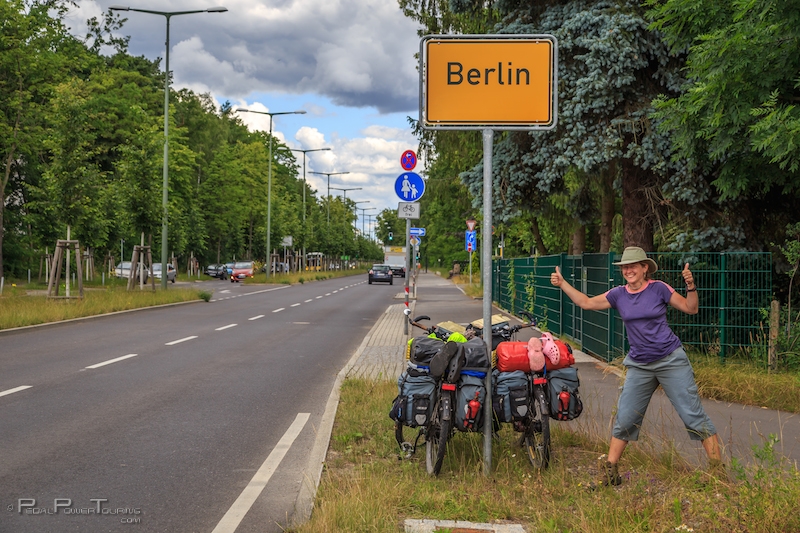 Made it to Berlin!!

The Potsdamer Platz has changed significantly since then! This is where Roger Waters held “The Wall” concert in 1990 to commemorate the end of the division between East and West Germany. Since this was the former guarded and mined death-zone, aka “no-mans” land ,between East and West Berlin during the Cold War, there was nothing here back in the day but a sad, desolate space that used to fill the space between the two concrete walls. Today, 25 years after the fall of the wall, it is again one of the most prestigious shopping and business plazas in Europe. 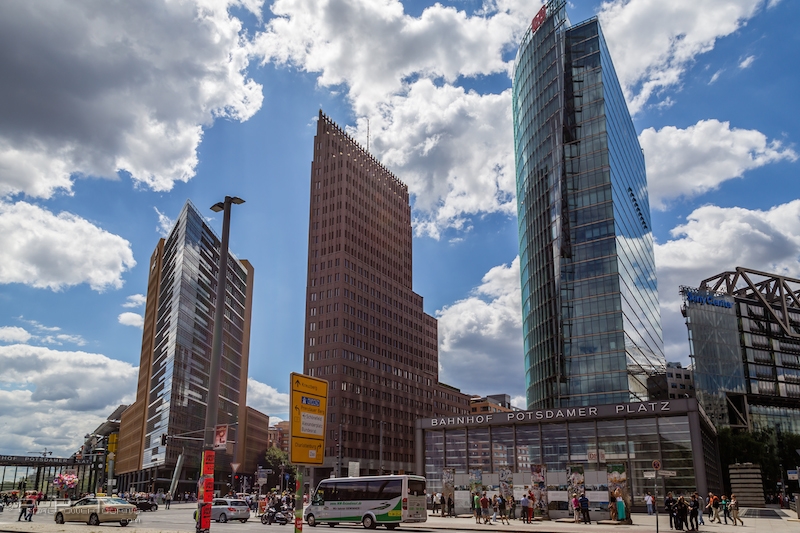 The Potsdamer Platz has changed a lot since 1989!!

Most of the wall has been chiseled away and torn down by Germans during the historical days in 1989. Today only a small section remains intact which has been beautifully painted by artists to remind everybody of this sad time in history . Now ,the East Side Gallery, as this stretch of wall is called, has become a major tourist attractions. Unfortunately, some self-absorbed, ignorant people with no regard of the meaning of the monument, insist on scribbling all over the artworks. 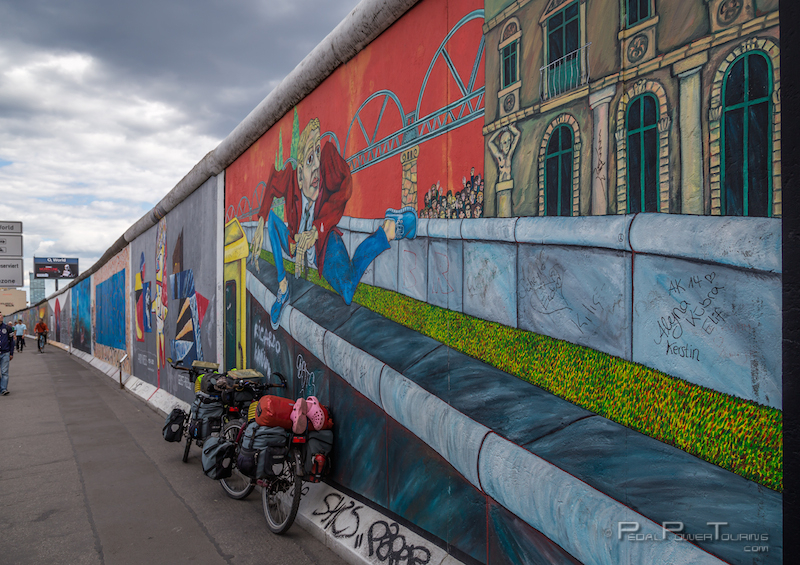 East Side Gallery. This is what is left of The Wall, that once divided East and West Berlin 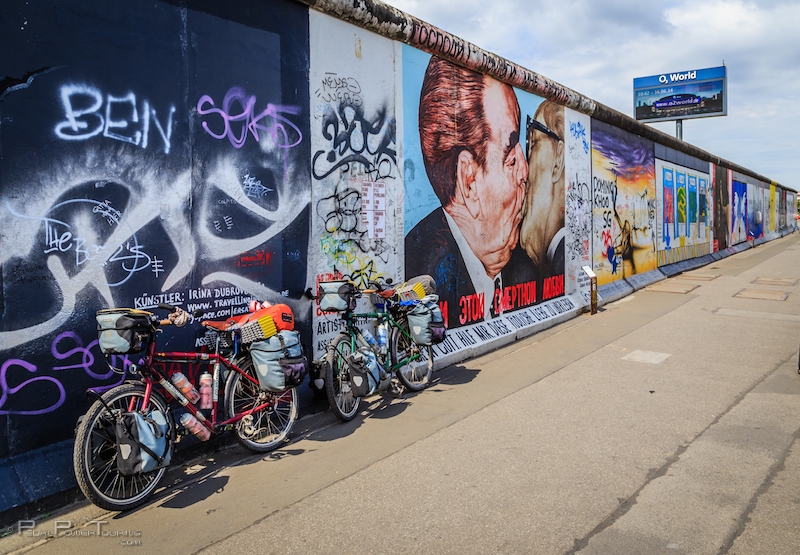 During our short stay in Berlin, we also had a chance to cycle on the former Templehof Airfield which was used during the Berlin Airlift, we walked by the famous Check-Point-Charley, visited the beautiful Oberbaum Bruecke which has become a symbol of unity, and checked out the Treptower Park with its Soviet War Memorial. 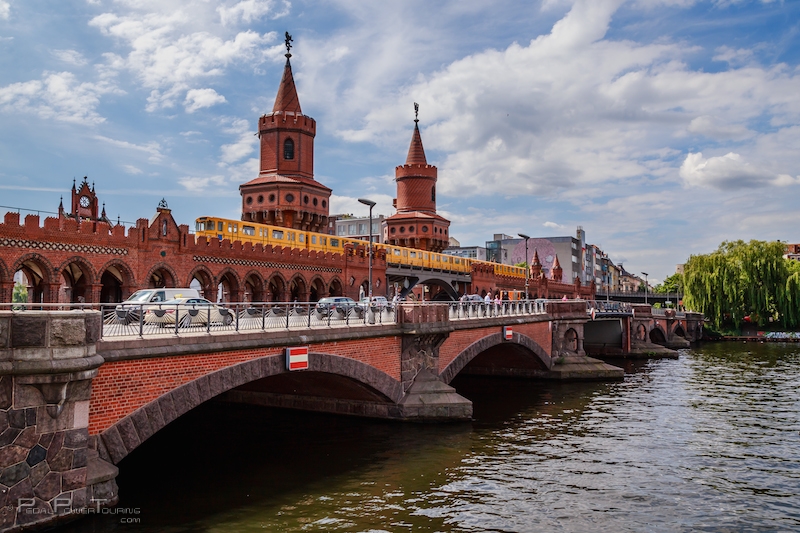 Most beautiful bridge in Berlin

Entrance gate to the Treptower Park, a Soviet memorial park 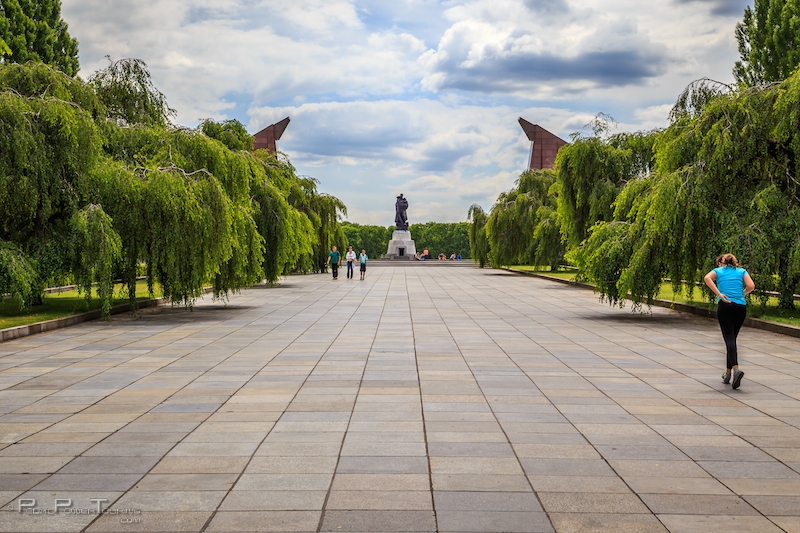 Walking up to the Soviet memorial 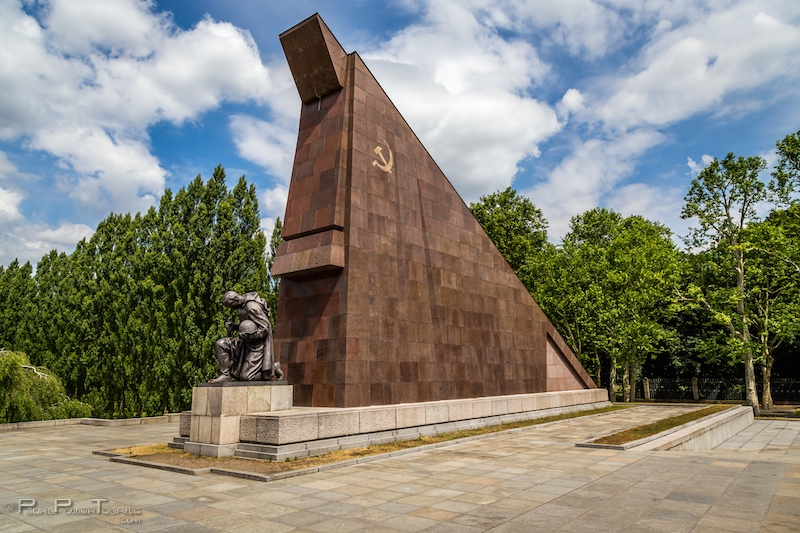 Memorial for the fallen Soviet soldiers 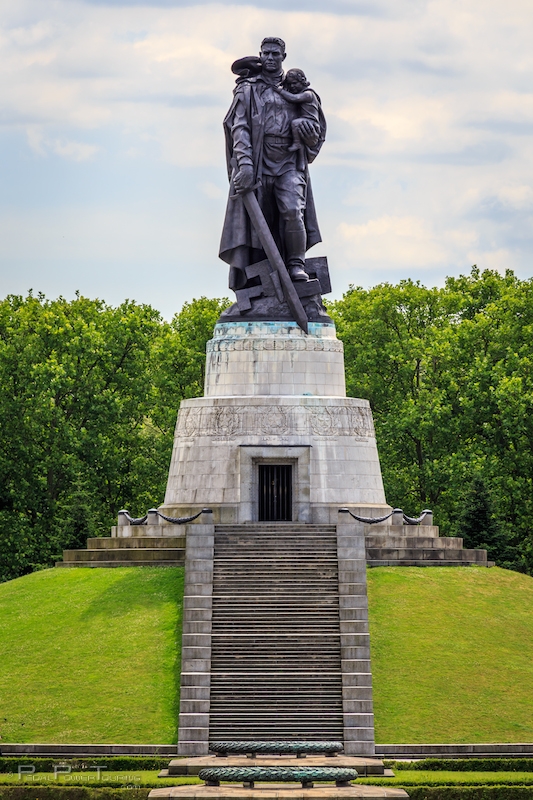 Soviet soldier, crushing the Nazi swastika while holding a child as a symbol for caring and a fresh beginning 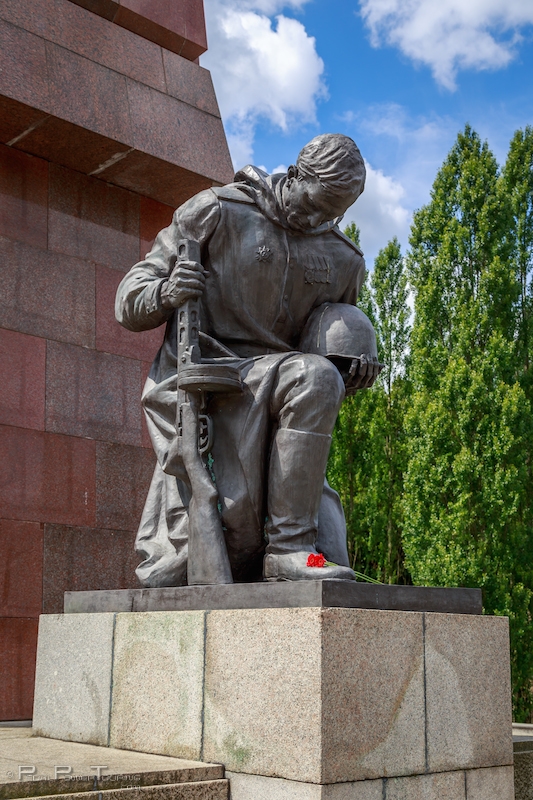 Eventually, it is time to get going North again. Unfortunately, to avoid the big city traffic and to have a half-way enjoyable ride out of Berlin, our path will take a small detour south-east out of the city, before we’ll be able to head North again…Heck, what’s a few more miles at this point! 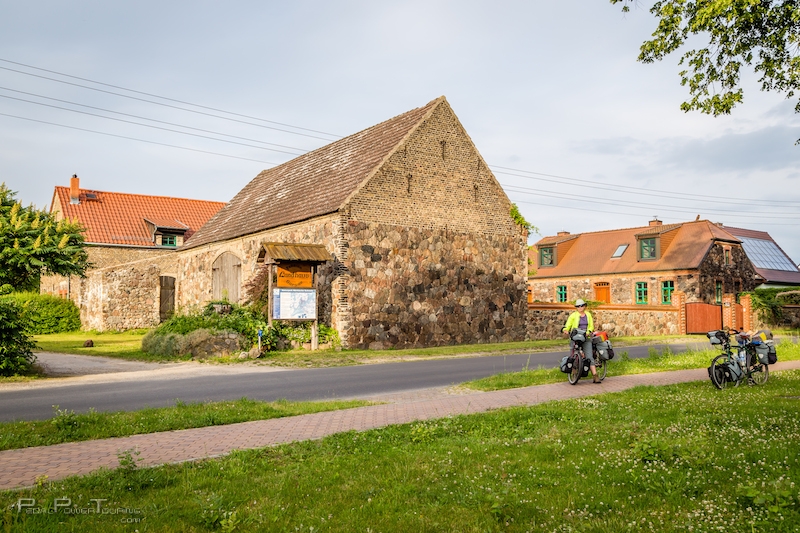 Back in the countryside