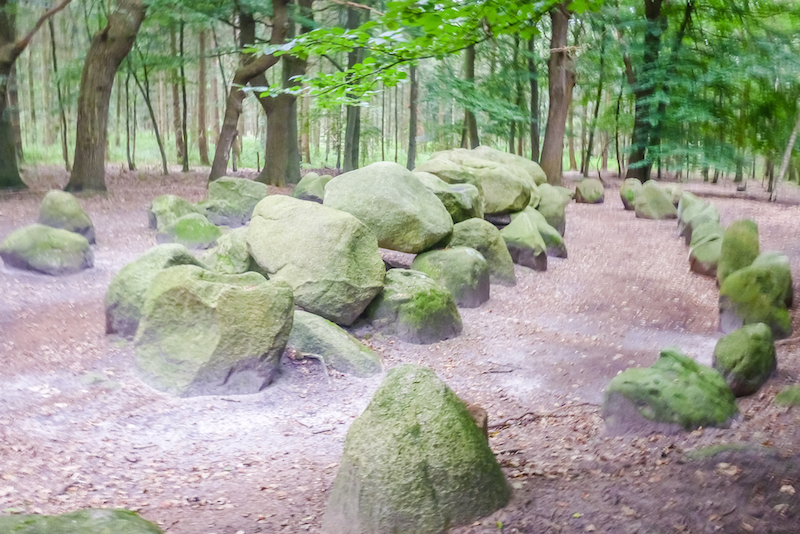 Posted at 10:07h in Germany by Petra 0 Comments
0 Likes
Share

A little worried, that someone might go for an early morning walk by the historic site, we decide to set the alarm, so we would get up early. It works, shortly after sunrise, we quickly pack up our bivouacking site and push our bikes along the “Vilsek Bride” to the picnic table. where we make coffee. It also gives us a good opportunity to take our time to wake up slowly . 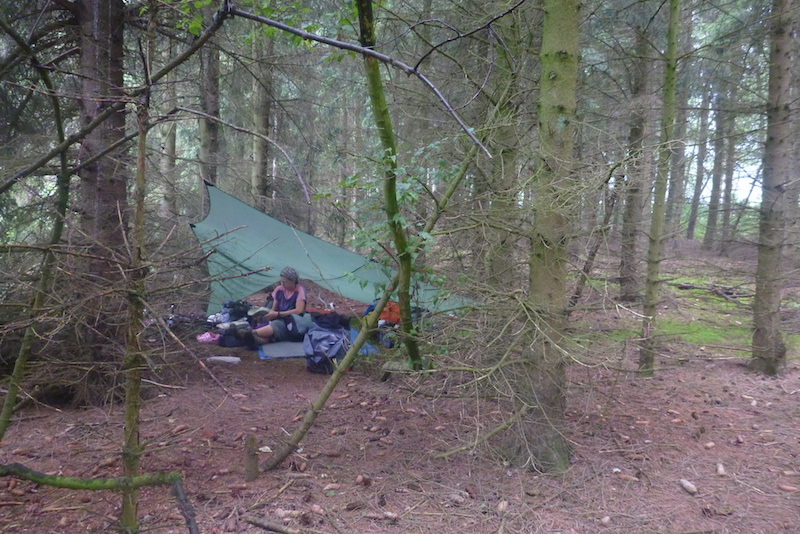 We are not camping…we are bivouacking!

While sipping on our coffee and munching on cookies, we check out the map posted near the picnic table. Apparently, there are about 400 more prehistoric sites in this region: hunebeds, dolmen, mausoleums, stone formations…some have intriguing names such as “Table of Sacrifices”, “Devil stones”, “Keystones” … apparently, the “Visbeck Groom” is located about a 4 km ride through the woods from the “Bride” where we enjoy coffee. We never knew of all these 5000+ year old sites, but are very happy to have stumbled upon one of them. 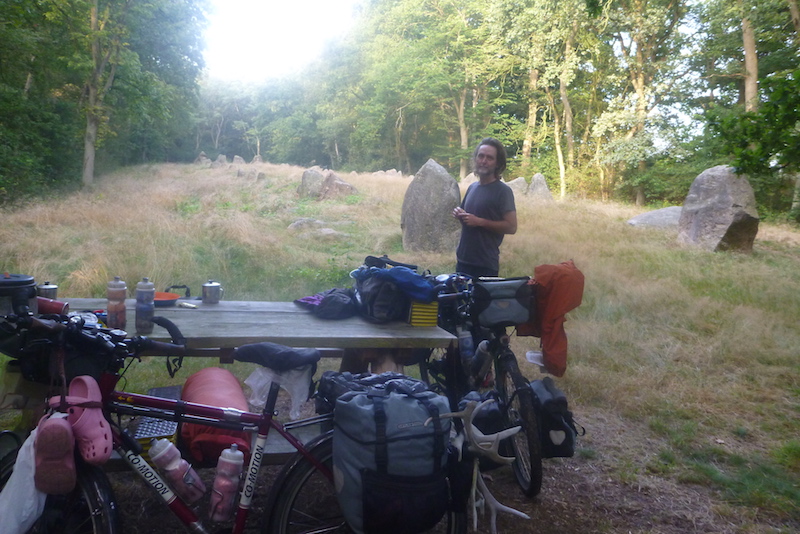 They are mysterious and spiritual.  It almost seems magical, how these huge stone formations appear in the middle of nowhere.  Who built these structures and took the hard work upon themselves to haul these giant, heavy rocks into these woods?

The “Vilsek Bride” reminds us of a huge, giant’s bed….apparently, that is what many people during the medieval times believed as well, which is the reason why certain formations are called “Hünebetten” in this area. 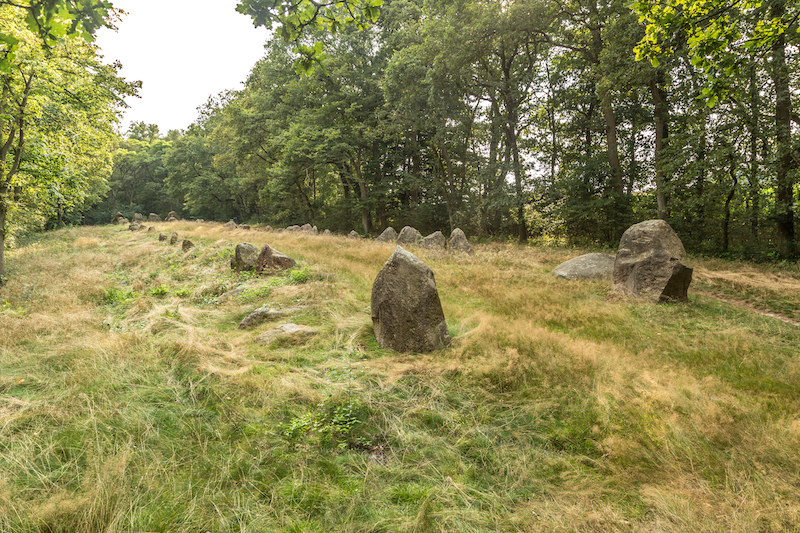 Our view of The Visbeck Bride during breakfast

Since we are a little tired of looking at the usual churches, cathedrals, and other beautiful, old buildings so abundant in Europe, we are excited to see that a bike path follows this “Route of Megalithic Culture” into the general direction we are headed and are eager to follow it. The few little detours might take us a little bit longer, but we do not mind. 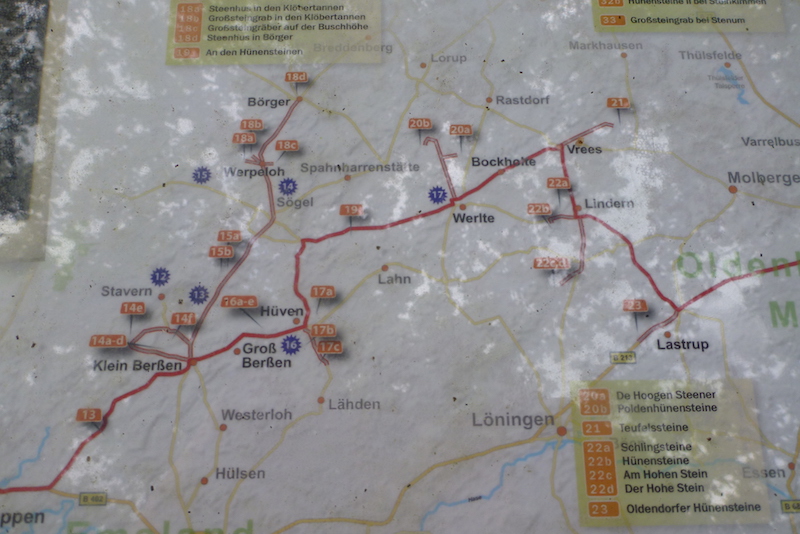 Following the Megalith Route toward the border

We pack up and follow the dirt path through the woods to the next few sites. There is a big cluster of ancient burial sites located near a small restaurant in the woods. Some are small, single chamber graves with enormous capstones, some are surround by one ring of stones, others are huge elaborate graves with double rings of stones. As we follow our path, we notice  other bike-paths and hiking paths, which indicate other megalithic structures than the ones on our path. Every once in a while the paths intersect with ours, which is nice, because the hiking route also has shelters along its way to take breaks.

In a small town along our route, we visit another tourist information center and pick up a map of the “Megalith Road”. Not only are there ancient sites to see along the route, but also quaint little villages and old, beautiful windmills, like the Hüvener Wind- and Watermill. Many of the old windmills are not operable anymore; however, a lot of them have been beautifully restored and are used as popular wedding places or restaurants these days. 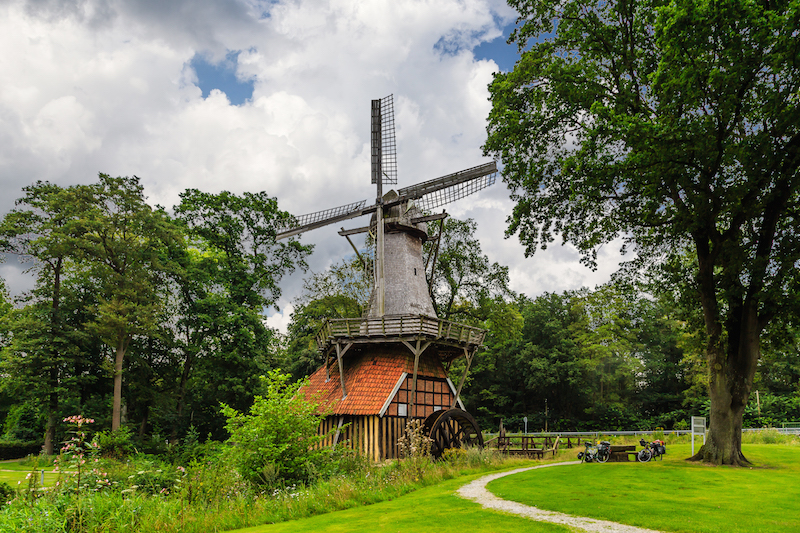 There are so many places and sites to see, that we have to pick only the ones that sound the most interesting along our route, otherwise it would probably take weeks to see them all.

Toward the end of the day, we encounter another hiking shelter right next to the quiet road. It is also located right next to several graves strewn all over the adjacent field of heather and tall grass. We check out the graves and notice that across the road are supposed to be several more ancient sites, one of them called the “The King’s Grave”. We push our bikes across the road, up a small dirt path, into another field of tall grass  on a hill. There are several more graves to be discovered. One of them is a reconstruction of what they might have looked like thousands of years ago. During that time they resembled more of an Indian mound and most of the big rocks were buried. 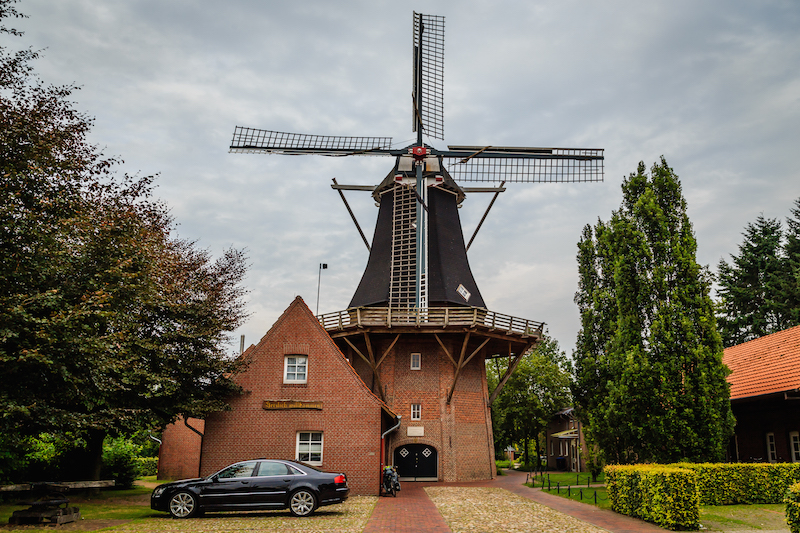 We look around and are still surprised, that we do not see anybody else checking out the sites. In a matter of fact, we have not seen anybody at any of the sites, except the ones located right by the restaurant earlier today. Since it is getting late again, we figure we could just stay in the area to camp. At first we consider the shelter because it looks like it is about to start pouring rain again.  But decided against it: it is too close to the road. So we push the bikes into the woods by the cluster of graves and try to find another bivouacking spot.

The ground in the woods is very bumpy, there are many tree stumps and branches. It takes us a while to find a somewhat even area, that would not get flooded should it rain. Eventually, we get lucky and find a place to lay down our mats and set up the tarp…just in time for the rain to start. We quickly pull all of our bags under the tarp, and try to situate our sleeping bag so it would not get wet. Unfortunately, we are not so lucky…apparently, our tarp is starting to leak along the seam and our bag gets sprinkled on anyway. 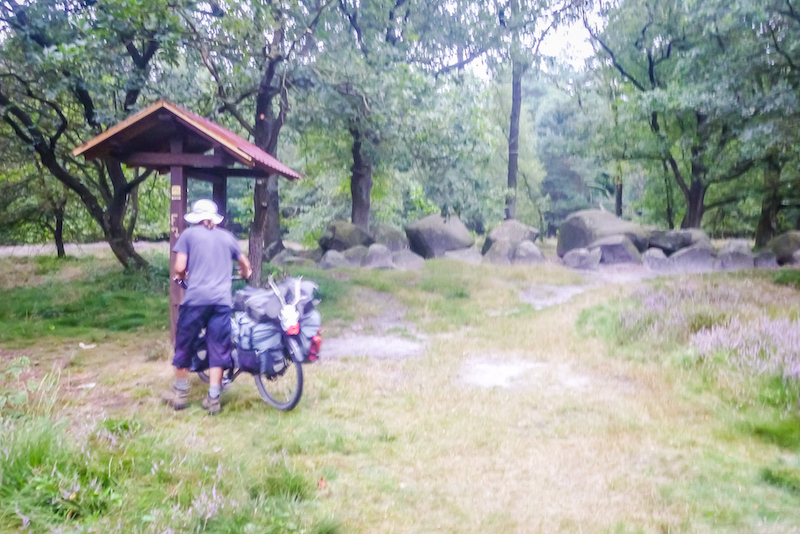 Pushing our Pangeas toward another cluster of ancient graves

We do not get a lot of sleep that night. In the morning, we pack up early and head to the shelter by the road. While we boil water for coffee, dry out and have breakfast, our tarp hangs behind the shelter to dry out as well.

The weather still does not look very promising, but at least it stopped raining for now. Once the tarp is almost dry, we hit the road. The border to the Netherlands should not be far anymore.

We decide to stop in Meppen, a town before the border, to resupply and to check internet at the tourist information. We park the bikes outside the office and check the net. Afterwards we sit in front of the office to eat a snack, when a German couple points at our “Rudolf” smiles and laughs. They start talking to us and tell us all about their motorcycle-traveling-adventures, and how much our bikes remind them of good times. We chat for a while and the two leave again.

A few minutes later, they return, introduce themselves as Barbara and Wilhelm and invite us to stay the night with them at their “windmill-house”. They tell us, they are so happy to have met us and want to share our adventures over barbecue and a glass of wine. Although, we did not get very far today, we agree to staying. We get directions to their home where we plan on knocking on their door later in the day. For now the nice couple still has to run some errands and we still want to find a Döner and meander through town. 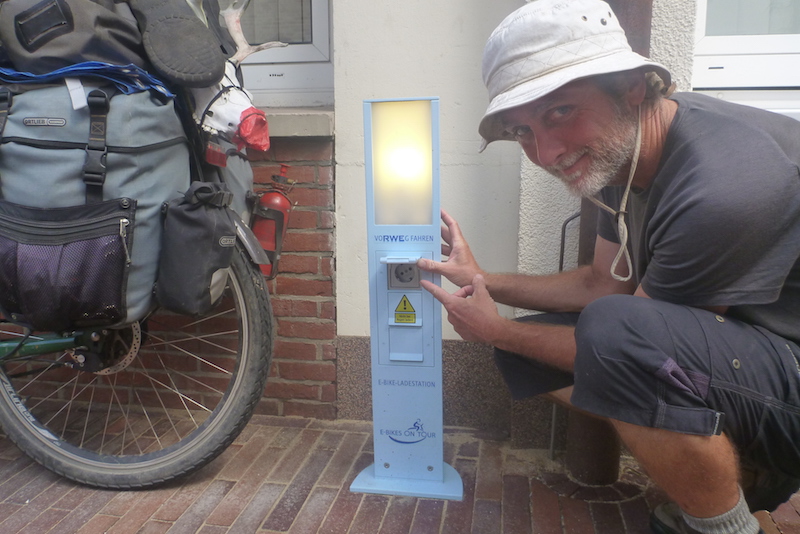 Recharge station for e-bikes in Meppen

After filling our bellies with a big Döner, we stumble upon a quiet area close to city hall. We discover there is internet and and to our delight we also find a bike parking area and a spot to recharge e-bikes free of charge…we use it to recharge our laptop, so we can Skype home with our girls.

Later in the afternoon, we ride out to the small village where Barbara and Wilhelm live. Like they said, it was easy to find…the only windmill at the edge of town. The two have been traveling by motorcycle through Canada and the US, Europe, and also parts of Africa. They decided a while back, that they could never live like “normal people” and would either buy a farm, which they thought would only be affordable somewhere in Africa, or they’d have to live in a lighthouse or windmill. After doing a lot of research, looking at numerous lighthouses and windmills, they have finally found themselves a little piece of paradise in this little community.

The two offer us a warm shower with real towels (it is the small things that make us really happy!) , we spread out our sleeping bag in the backyard so it could finally dry out, and we stow our bikes away in the old baker’s-house next to the mill. We spend a wonderful evening with the enthusiastic couple, find out many interesting things about enduro-motorcycles, traveling by motorcycle, and about restoring windmills. At times we think, traveling by motorcycle might not be such a bad idea. We check out the property, the old windmill, the baker’s house and miller’s house. We eat delicious barbecue over a glass of wine and eventually, we all get to go to bed…it is the first actual bed we get to sleep in for a really long time…and feels great!

In the morning, we have a delicious breakfast and get ready to leave, when Barbara and Wilhelm pull out their bikes to come along for a short ride.

Thanks again Barbara and Wilhelm for a great time and being part of our adventure!

All comments are welcomed here, so if you would like to leave us a comment that would be great! We appreciate all your kind words that are left over on Facebook, but when we return home, our Facebook page will most likely go away and sadly so will your wonderful comments. If you are having troubles with leaving a comment or if you are worried that we will sell your email address to the NSA, just make up an email.