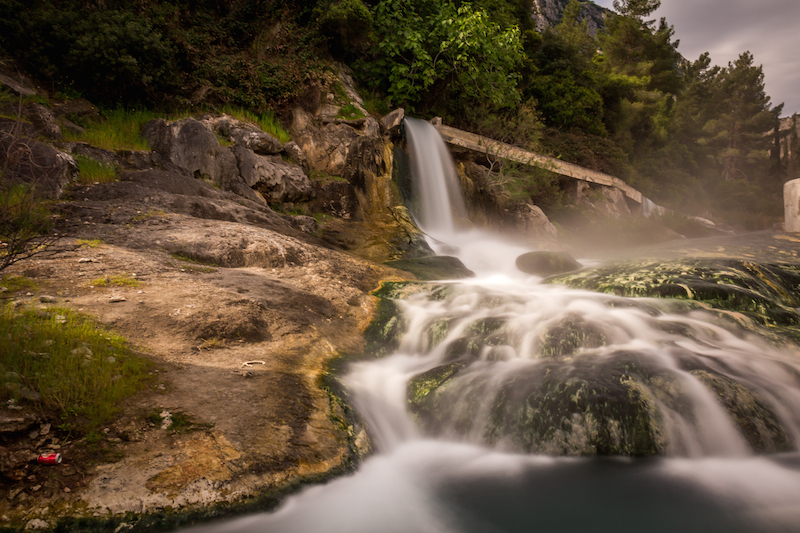 After 11 days in Meteora, a lot of hiking, a twisted ankle, and experiencing our first bad case of travel fatigue (which the topic deserves it’s very own blog entry) we finally came to the conclusion that it would be the best thing is to keep cycling through central Greece to Athens as we had planned. Should we still feel like we need a break from the bike we can still decide there on how to continue. Maybe we’ll find our bicycling “Mojo” again, or maybe we’ll take a ferry north, head to Germany, get two backpacks and hitchhike to Irun, Spain at the French border and hike the northern coast of Spain to Santiago de Compostela… we’ll see. For the first time in Greece, we finally get to ride on about 50 miles of mostly flat terrain, before having to climb again. Never before would we have thought, that Greece is this mountainous, yet, as we look around us, all we can see are mountains after mountains… a lot of them are so high, they still have snow caps. Thank goodness, our route is not leading us over those, so we just get to enjoy the marvelous view. No, we are not in the Alps…this is central Greece…and yes, those are snow caps

After the long climb to Lamia, both of us felt that we had enough of this mountain-climbing-business for a while. We looked at the map and decided to follow along the motorway, which pretty much parallels the coast, instead of cutting inland and over who knows how many more mountains.

We found, what seemed to be the old motorway and followed it for the most part. It was great, there was hardly any traffic on it, it was fairly flat, and occasionally it would make a small detour or turn into a dirt road. Needless to say, we were pretty happy with our choice.
At one point though, we were not quite sure on how to continue, so we stopped at a gas station to ask for direction.

A couple of young guys worked at the station and were happy to help us out. They even told us that our path would go right by the famous battle field of Thermopylae, and that we should go soak our sore muscles in the hot sulfur springs like the Spartans used to do after they fought in battle to rejuvenate.

They also “warned” us that in two days was going to be Easter Sunday, which is the most celebrated holiday in Greece; and according to them it is the holiday when Greeks are extra nice to everybody. Although, we already thought all the Greeks we have met so far were already all very nice. They also told us, if we were to ride through a small village we’d certainly be invited to have roasted lamb for Easter dinner. Excited about our route and the upcoming holiday, we said our thanks and goodbyes and headed toward Thermopylae. The hot sulfur springs in Thermopylae

Shortly after we saw the sign for the historical battlefield, we turned off the road. We could actually smell the sulfur springs before we saw them. There were a couple of locals bathing in the hot water and enjoying the hot shower from the waterfall. We were a little reluctant to get in the water, because we planned on wild camping and would not be able to have a shower to get rid of the egg smell, and nobody likes a rotten egg smelling sleeping bag!

However, a very nice young lady sniffed her husband for us after he got out of the water and ensured us, that she can not smell him. That’s all it took for us to throw on our swim wear and to enjoy the hot springs. When in Greece do as the Spartans did. The story says, this is where the Spartans rejuvenated between battles

After soaking our bodies in the hot springs, we really did not feel like pedaling any further for the day. We headed back to where the battlefield was located, and saw a couple of German camper vans parked at the actual beginning of the spring. We asked them whether they are staying the night, or whether the police, that we saw earlier was giving them any trouble. According to one of the couples, they had unknowingly parked their RV right in front of the police station at the entrance road to the springs earlier in the day. That’s when the police came out and told them to go in the back of the springs. So we thought, heck, if they can stay, so can we. We looked for a level spot, out of sight of the RVs and the police station, and camped out at the bottom of the mountain, on the historical battlefield of Thermopylae. wild camping on the historical battle field of Thermopylae

Even though, we felt refreshed and rejuvenated from our hot bath, we were still not in a rush to leave in the morning. We enjoyed our cup of hot coffee, while imagining, what this battle must have been like. The area and coast line has changed quite a bit since the 300 Spartans fought the Million Persians, and the very narrow gateway between the mountains and the sea has become much wider over the centuries. Right where we sat men have fought and their blood was spilled, it was one of the most important battles in ancient Greece; and yet, it was a stunningly beautiful and peaceful place. The hot springs in the morning

Eventually, it was time to pack up and to keep going. Less than a mile down the road, we rode by another monument for the Spartans and what was left of one of the other ancient gates and a fortified hill. Pangeas hanging out with the Spartans

Later that day, we are stopped at an intersection in a little town to see which way to continue. A car pulls up next to us and a lady starts honking her horn to get our attention and waves us over. Ron rolls over on his bike to see, what she wants. She hands him an Easter basket with colored eggs and home made cookies. Ron thought, he’d just take a couple of each, but she looked at him as to take the whole basket. After Ron gestured, that we have no room on the bikes for the whole thing, she just smiles, grabs a bunch more cookies and eggs, hands them to him, and wishes us a “Happy Easter”, before speeding off. After another long day of riding over several rolling hills, our route takes us on a dirt road through the countryside of Greece. We rode through miles and miles of nothing but wild flower fields, olive groves and farm land, without a house or person in sight. Just around sunset we decided to call one of the olive groves our home for the night.

Easter Sunday morning came around and we figured nobody was going to do any farming today so we should be able to sleep in a little. Needless to say we were a little surprised to wake up to the sound of a tractor going by our tent. Apparently, the farmer didn’t see us or didn’t care that we are camping between the olive trees.
We quickly tore down camp and took off cycling, before taking a breakfast break on top of a hill with a great view. wild camp spot in the olive tree grove, way off the beaten path

As we ride through several small villages, we can see people getting ready for Easter dinner. Huge barbecue pits are being prepared, fire pits are smoking, lambs are put on long skewers, and people look busy and happy. By noontime, the smell of roasted lamb fills the air in every little village, families sit together around tables,drink, eat, and have a good time. taking a break in a field of wild flowers

At some point during our travels that day, our paved road turns into another dirt road. It twists and turns up and over a couple of hills, just to turn into a dead end at an old construction site where the old national road used to go. We turn around and back track a few miles, when we see a painted arrow lead to another dirt road. We wait for a farming couple to usher their sheep and goats down the road and head up the second long, windy, dirt road which leads up another mountain and to another dead end. waiting for the traffic to pass by

Tired of hitting dead ends, we turn around, backtrack another few miles and decide to stick to a paved road, which seems to make quite a bit of a detour. a lot more off road riding

When we reach another village, we try to get water from the public water fountain in town. Unfortunately, it was turned off. An older lady comes rushing out of a house, says something that we do not understand, grabs our water bottles and heads back to her house. I follow her to retrieve the bottles, but once in the house, her family tells me: “We celebrate Easter today and we would like to invite you. Why don’t you tell your husband to park the bikes, come in, sit down, eat with us and have a beer.”

They get a table and chairs ready and fill our plates with roasted lamb, feta cheese, spinacopita, bread, tzatziki, and Easter eggs. We chat with the Dad of the family, who used to drive trucks from Greece to Germany and knew some German. Other family members tell us about Greek Easter traditions; we toasted with the family and knocked Easter eggs for good luck.
The generosity of strangers is absolutely amazing! Eventually, we had to get going again. After saying thank you and goodbye, we ride past several other family celebrations on our way out of town.

We wanted to make it close to Athens for the night. But after our detours and having to ride over another pass it was already getting dark, before we found a level spot along the pass to set up camp for the night. a little bit of off-road riding sunrise at our wild camp spot