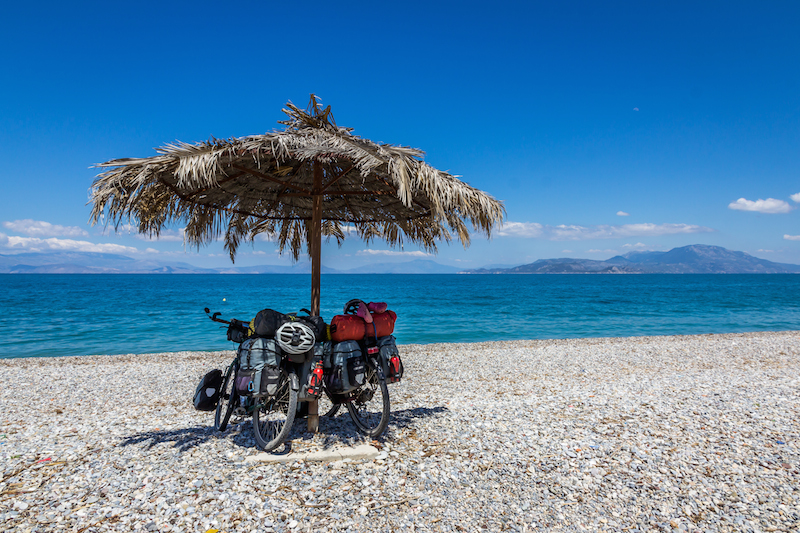 13 May Goodbye Crete, a short ride through Peloponnese

Posted at 06:36h in Greece by Petra 2 Comments
0 Likes
Share

“The longer you stay on Crete…the longer you’ll stay on Crete!!”, that is only one of the warnings we have heard while procrastinating to leave the Island. Apparently, there is some magical power on the island, that just sucks people in and makes people stay for weeks or months on end, if they are not careful. The warm sunny weather, the great scenery with the deep blue water on one side and the rugged mountains on the other,  the laid back, care free attitude of the islanders, make it really easy to fall in love with the island. Also, it felt so good to finally wake up in shorts and t-shirts and to be able to sit around in shorts in the evening over a glass of wine without shivering. So no wonder, that it  actually took a few days of waking up, looking at each other and saying…”Maybe tomorrow!” to finally leave Crete.

After a long time discussing the  “where do you want to go”, “where should we go” and “how do we best utilize our visa?”, we have decided to skip Turkey for now. Instead, we checked the weather situation in Northern Europe and were happy to see that the temperatures are improving. So we decided that we should start heading North. If we want to make it to the Nordkapp without freezing too much, we need to make it there by the middle of July. Also, we can drop off a few things in Germany on our way to lighten our load. 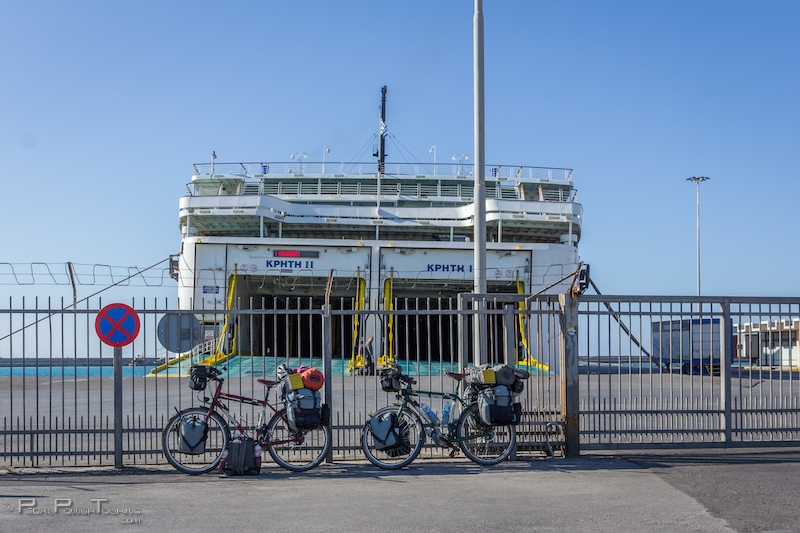 Our Pangeas are waiting to board the ferry

Since our ferry would not leave Crete until the evening, we had plenty of time to slowly tear down camp, have breakfast, and pack. We even had enough time to meet another bike tourer, that arrived the night before. Rasa is from Serbia and is cycling the “Cradle of Civilization” in stations. On this tour he has been visiting a few Greek islands and plans on continuing in the Peloponnese near Korinthos, where he left off on his last cycle trip. We quickly realized, that we were going to be on the same ferry and figured we could chat more later while crossing over to Athens.  Since we still needed to get food supplies and planned on getting “deck space” tickets again, we left early to fetch a comfy spot on the boat. 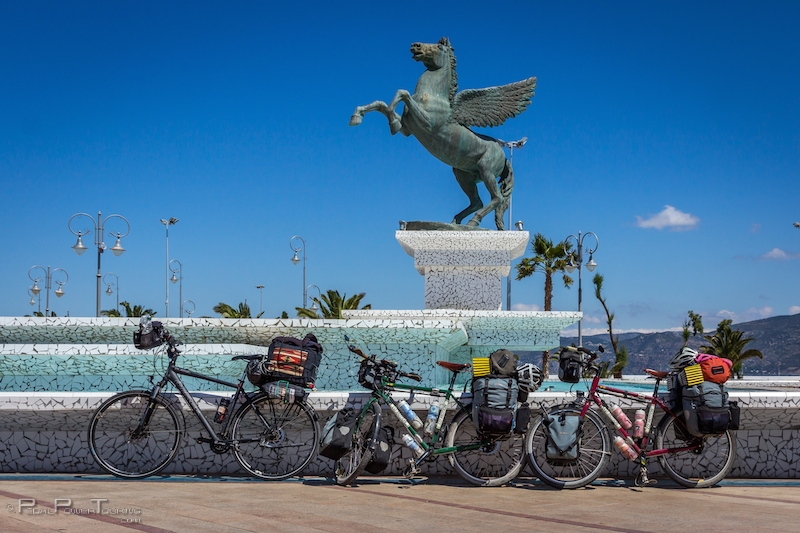 Pegasus showing off its wings

After running our errands and waiting to board the ship, we parked our bikes and secured them to the side rail inside the belly of the boat; grabbed our mats, liners, and food and headed upstairs to claim a spot for the night.

We hung out in the old Casino area, where there were plugs at every table, so we could charge a few of our gadgets. When we were getting tired, we started looking for the couch/waiting area to crash for the night. Apparently, the boat is much bigger than we thought, because we did not see Rasa. Eventually though, it was getting so cold during the night, that we moved upstairs to the “pull-chair” area and crashed on the floor between the rows of seats. Thank goodness for camping mats.

With only a couple hours of sleep, we arrived in Athens. Tired and stiff from lying on the floor most of the night, we debarked the boat right around sunrise. At the port we spot Rasa taking pictures. We gave him directions to the train station in Athens, but then we figured, since he was heading the same directions as us, we could just ride together for a little while. 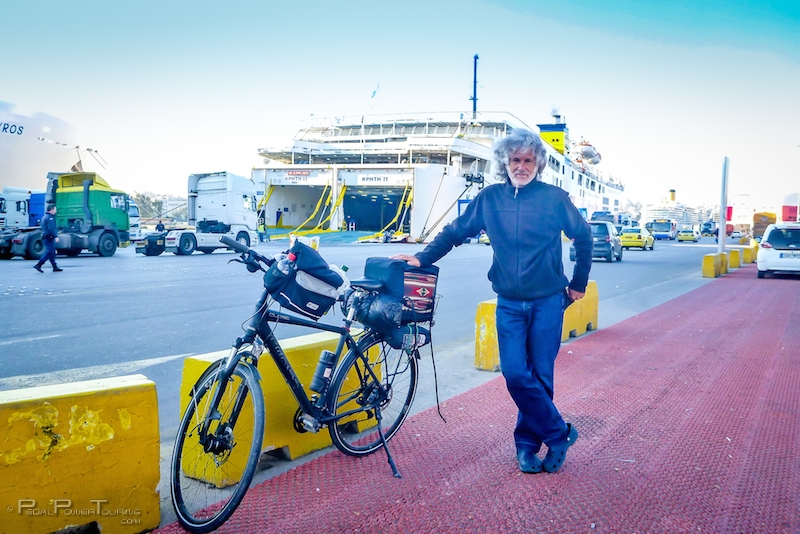 Meeting Rasa again at the port

After a long night on the ferry, we were really not looking forward of riding through the busy morning traffic in Athens and long stretch of urban traffic toward Korinthos. As Rasa checks the train schedule we decide to come along with him on the short train ride to avoid the city traffic.

The train goes every hour, so we did not have to wait long to roll our bikes on the bike cart. After a crazy train change that involved us hurrying from one train station to another and lugging the heavy bikes down several stairs, we arrive in Korinthos, where we check out the Pegasus monument and enjoy a cup of cappuccino and an ice cold Uzo, while chatting about our travel plans before saying good bye. 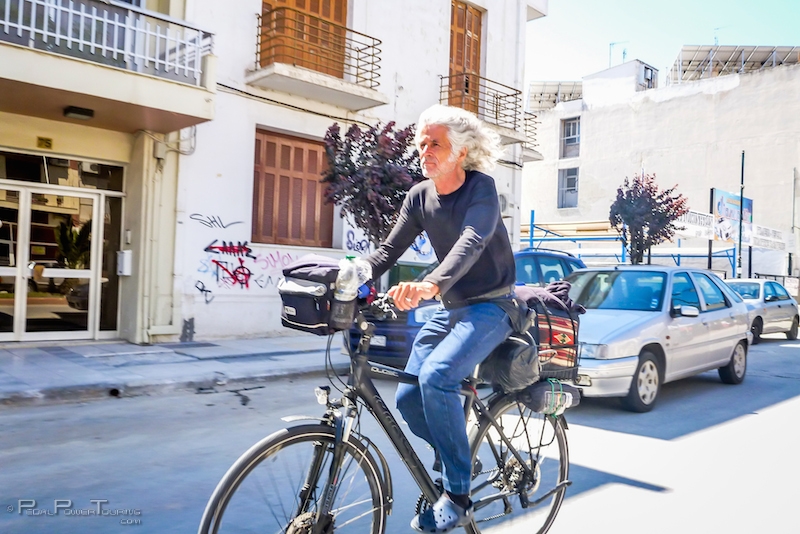 Our route to Patras pretty much followed the Peloponnese coast, which made for nice easy riding. The scenery is still stunning, with big mountains to our left and deep blue sea to our right. Unfortunately, like most coastal areas, there were lots of little villages and built up areas, which made wild camping pretty much impossible. Also, the few campsites that were marked on our map were either non-existent or had not opened for the season yet. 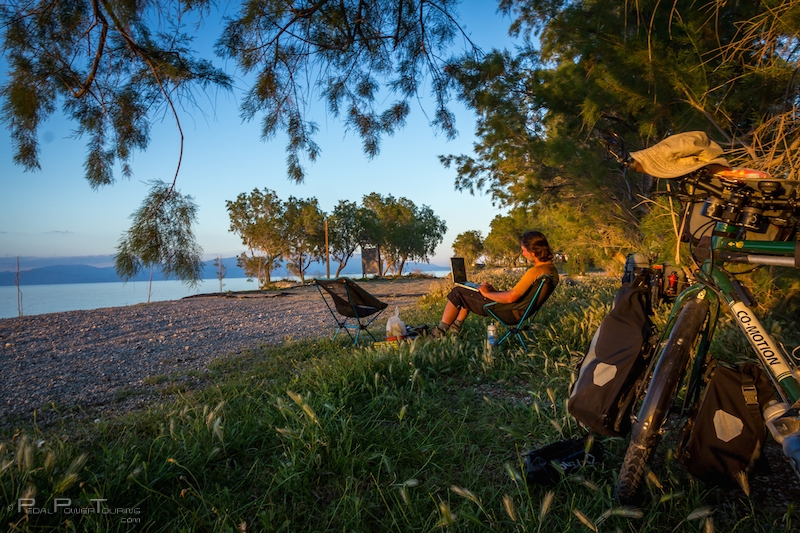 Our camp spot in the closed camp ground

As it was getting late, we made it to another little village, which was supposed to have a campsite according to our map.

We found a neglected area at the water, that looked like it would have been a campground at some time in the past. There was also an Italian camper-van parked in the drive way. We asked the couple in the camper, whether they knew if this was the campground. Apparently, they were told by locals that: yes, it used to be the campground, but it has been closed for quite a while, but it should be no problem to stay the night. So, we figured, if it is OK for them to stay, then we should be fine as well and looked for a spot to pitch our tent in the old deserted campground. 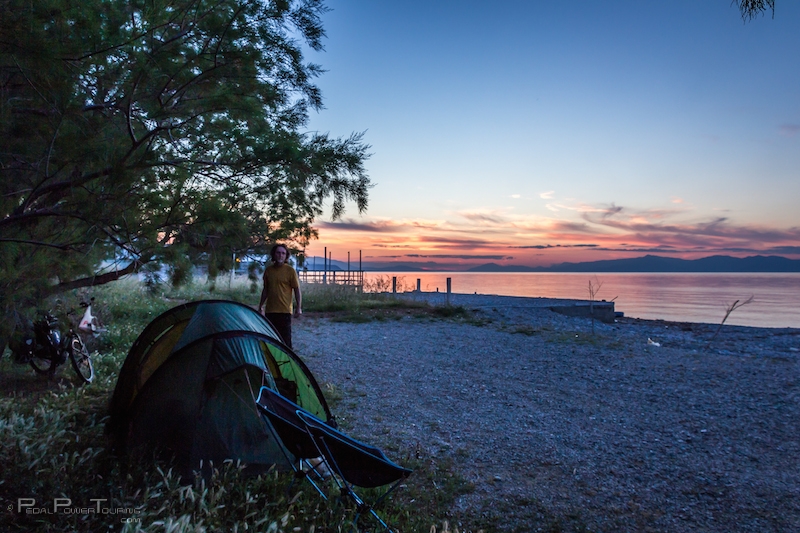 It was hard to believe, that this campground in the Peloponnese had gone out of business, the location seemed perfect, there was a beautiful pebbled beach, the blue ocean looked very inviting, stunning mountains surrounded the area, and the village was close by to get supplies. Now, we have the whole place to ourselves and nobody seemed to care. 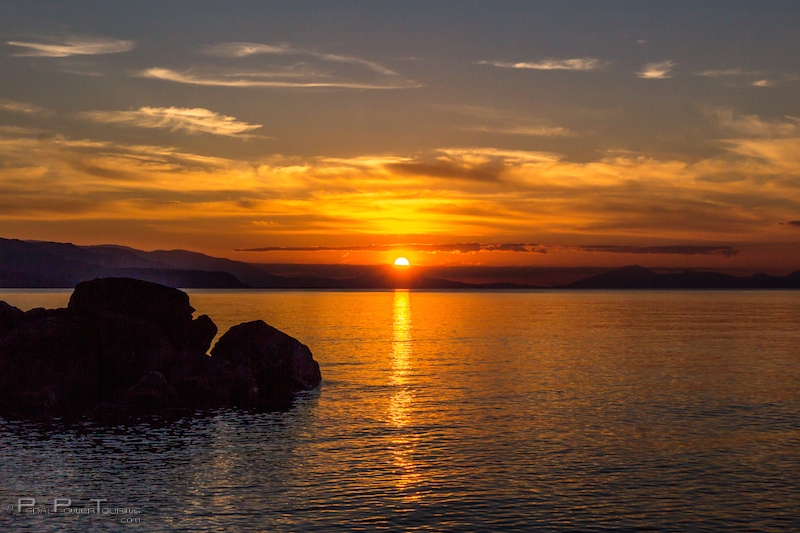 Sunset at our private campground

The next morning, we kept riding toward Patras. The road along the ocean was fairly quiet and occasionally we rode on an old old rail road track, that has partially been converted into a dirt road. We took a few breaks to enjoy the nice weather and the ocean views. Since we had nothing but mountains to cycle on in the past few months, we were surprised how far we have made it in such short time on flat terrain.

Being ahead of schedule (our next ferry would not leave Patras for a couple more days), we figured we could spend an extra day in the Peloponnese about 30 km from Patras. 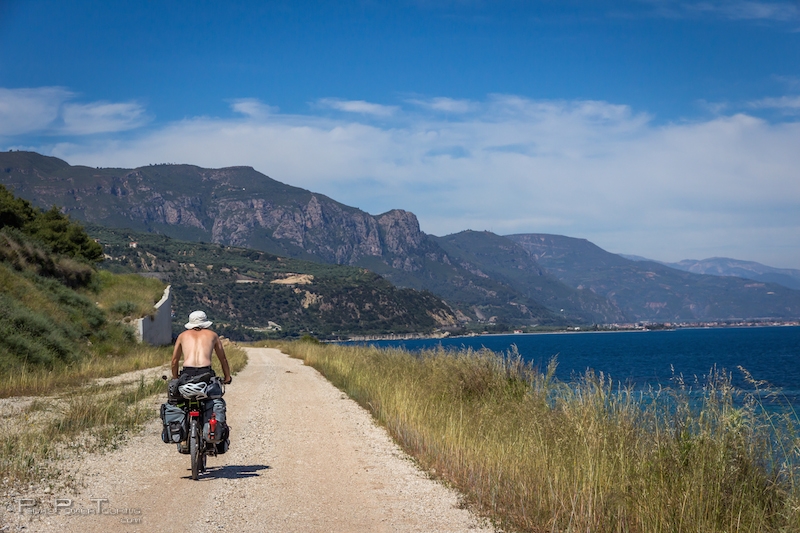 riding along the old railroad

Our extra day, we spent getting food for our upcoming two- day ferry ride, hand washed most of our clothes ,and soaked up the sun.

We also met Ross, another long distance cycle tourer who lives in Jersey, UK. He loves to play accordion and wants to eventually go to Italy, where the most famous accordion maker and an accordion museum are located. Of course, he also plans on trying out any accordion possible. 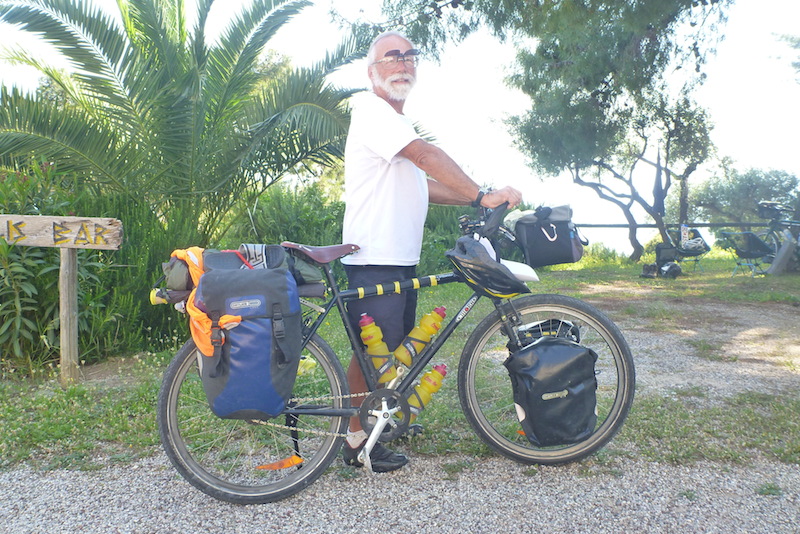 For the moment, though, he looked for company, because he felt a little lonely and just wanted to talk with people for a while. 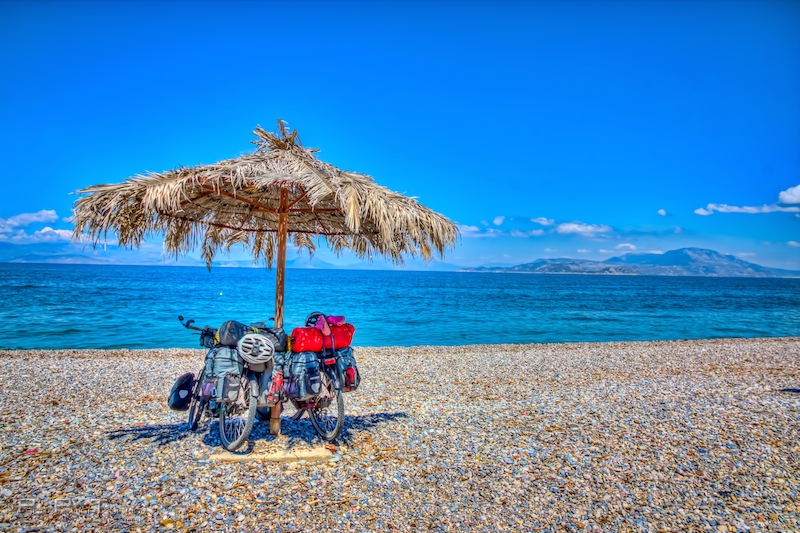 Our bikes chilling at the beach

Ross’s plan was to visit another Greek Island and then head to Ancona to visit the accordion attractions. Unfortunately, the ferry to the island is not running yet. We come to find out though, that the ferry we are taking to Trieste, will stop at Ancona first, which meant we got to spend a little more time together on the ship.