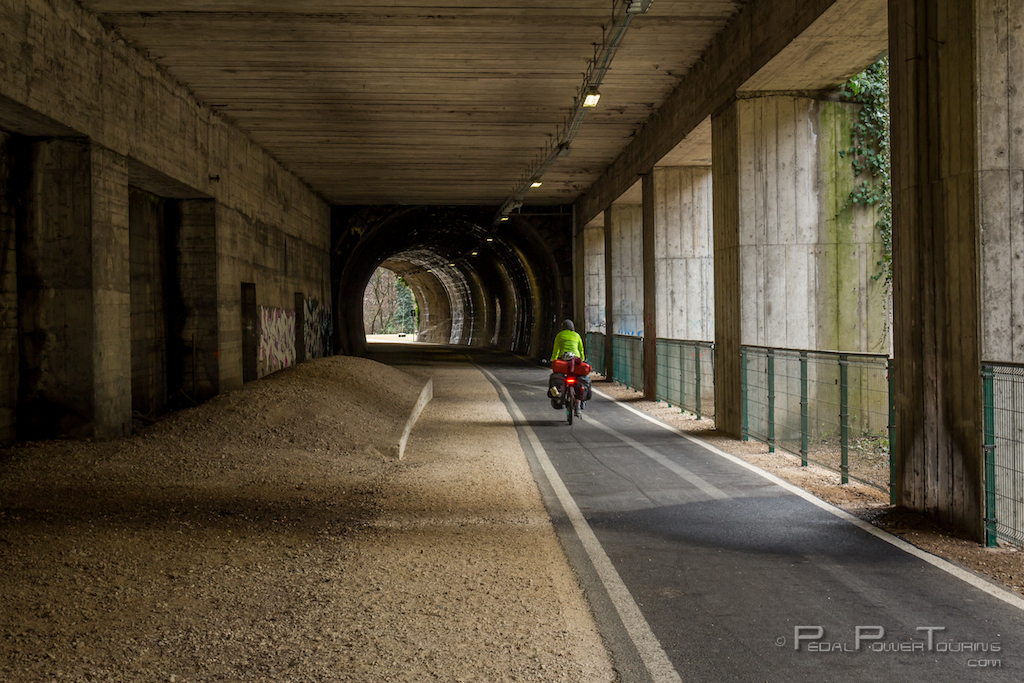 The last few days we have been doing a lot of cycling through the region known as South Tyrol Italy trying our best to finally get out of the snow. Our legs are pretty worn out, but we have hopefully left all the snow behind us. Now if we could get the rain to stop and have some warm weather, we would be set! There has been the occasional break in the clouds, but for the most part of the last three days, we have been steadily rained on and the temperatures have been in the upper 30s and low 40s. Needless to say, we are pretty worn out and our spirits have been up and down, so we are going to take a down day or two in Verona. Throughout the valley, there are several old castles, fortresses, and neat little towns to be seen and visited. One of the many castles that we see. Going through a small and scenic town. Starting at the top of Brenner Pass there are signs leading to the bicycle path, but since the first 40 miles or so were covered in snow we had to wait until we reached the bottom before we could even see it, much less cycle on it.  It appears to be an old rail road track that has been converted to a beautiful path that is used by bicyclists, runners, walkers, roller bladders, etc… We have cycled well over 100 miles of it and rarely been directed back on the street. The path has its own directional and traffic signs that guide you along, keeping you safe and away from all other vehicles. Also, since it is an old rail road track, there are virtually no inclines and the tunnels through the mountains are already there. Truly stress free cycling! We cycle through several of these old train tunnels. The longest was over a 540 meters. Everyone has their own tunnel. Main street on the left, Autobahn on the right, and cyclists in the middle.

After more than 5000 miles, one of us has finally worn out their rear disc brake pads. Thankfully, we have our very own mechanic with us and plenty of spare parts. Replacing the first set of rear brake disk after more than 5000 miles.