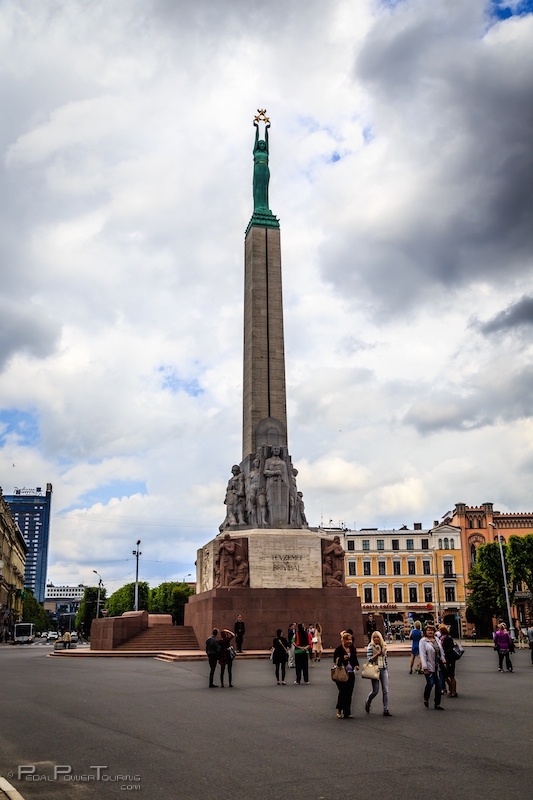 Posted at 07:28h in Latvia by Petra 0 Comments
0 Likes
Share

Today we are going to cross into another Baltic state and continue our bicycle touring through Latvia. Our nicely paved road turned into a bumpy ride shortly after crossing into the country. The road suddenly resembled more of a patchwork blanket than a motorway. It also had a set of deep groves from years of cars and trucks wearing it down, which sometimes made it difficult to stay out of the main traffic. Later on during our visit in the country, we were told, that the roads were bad because the government is more corrupt than in the other Baltic States and a lot of the EU money that was meant to pay for new roads just seemed to “disappear” somehow…a story we hear way too often during our travels! 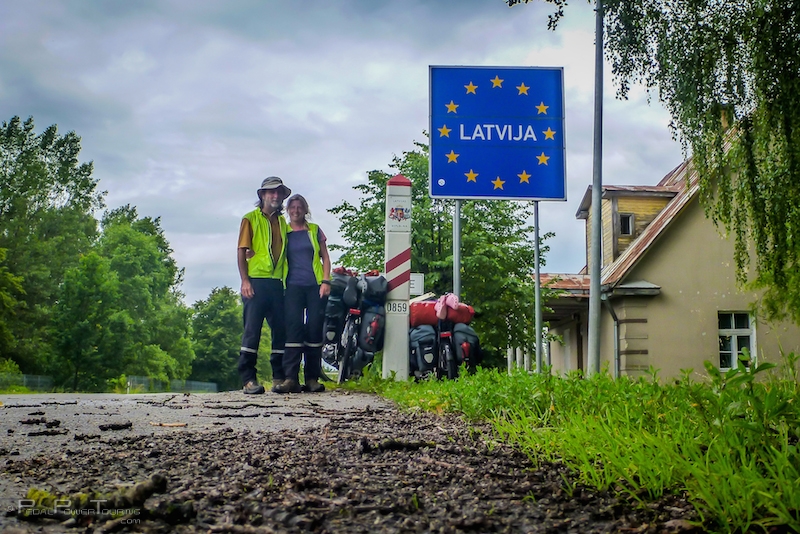 As we take a quick break at a gas station, we have a short talk with a young guy who drove a van with mountain bike decals and adventure riding stickers all over it. He told us about his Dad’s bike touring adventures; and before he took off, he asked us where we were headed to. After telling him that Riga was our destination, he exclaimed: “The Traffic is horrible on this road! Good luck!”

Not sure what to make of the little statement, we continued our ride North. Soon we came to a construction site. Half the road was torn up and blocked off for at least a kilometer. The traffic on the other half was directed with a stop light. Since there were a lot of trucks collecting by the red light we decided to go ahead and start riding on the torn up road to get a head start before the light turned green. We hustled and rode as fast as we could and actually made it through the long construction zone before any of the trucks caught up to us.

After a short stretch of fresh pavement we go through another construction site similar to the last one, before the street finally was completely torn up for several miles.

By then traffic had pretty much died down and the few vehicles left on the bumpy dirt road were not able to go very fast, which was nice for us.

Eventually, we made it to Riga. Initially, we wanted to stay at the campground, but soon figured that it was pretty far from the city center and by the time we would have paid for transportation, we could pretty much stay at a hostel…and so we did. 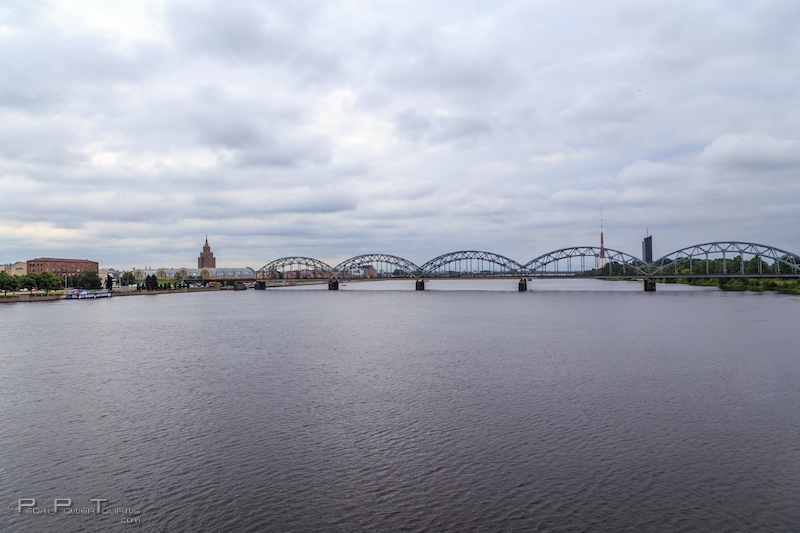 one of the few bridges in Riga

After getting settled into our room we spent the following day finding a place that can look at our computer, and we did. The guy behind the counter did not have good news for us. Apparently, we would need an entire new motherboard which came with a hefty price. Considering, that the darn thing was already pretty old for computer-standards, we decided to check on what a new one would cost. We headed to another computer store, where we met Dmitrji, who is very knowledgeable with his computers and made us a deal, that we could not resist. Besides, we did not have many other options. He made us a cup of coffee, then he and Ron checked the laptop to see whether the hard drive was affected. Luckily, all of our contents were still intact and Dmitrji assured us that it would not be a problem to carry everything, including all the applications and programs over to the new one…what a relief, we really would have been bummed out to have lost all of our pictures and having to buy new maps. 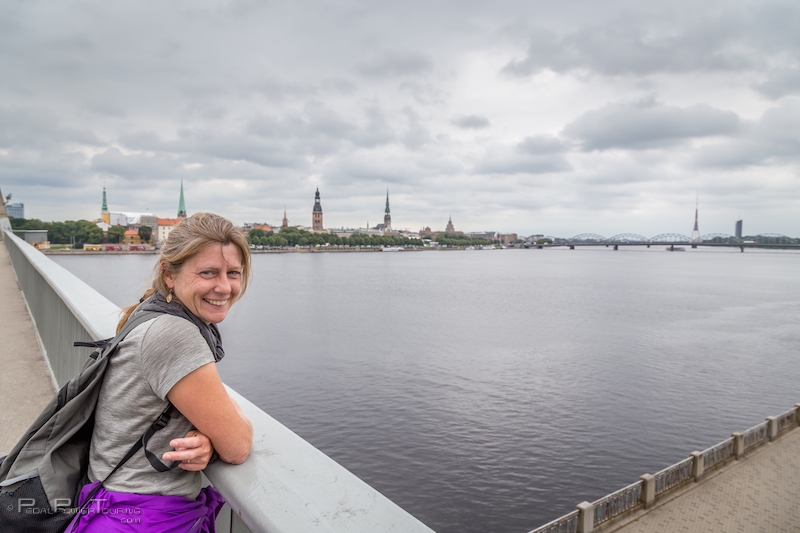 We hit it off very well with Dmitrji right away. He told us about his mountain bike racing and about Riga, he and Ron talked a lot of computer jargon, mountain bike racing, and of course we chatted about our travels as well. Before we left he asked us to meet him again after work the following day so he could show us more of his city…and maybe have a beer together.

Great! We would love to!

And so we did. 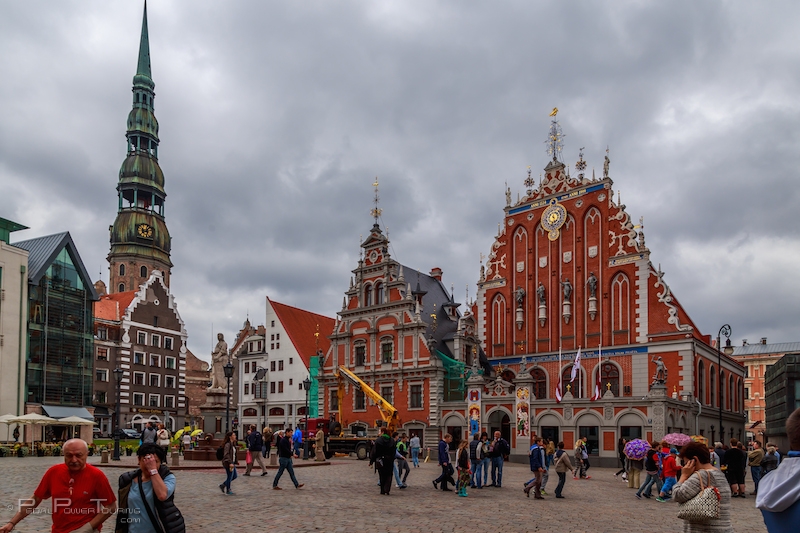 The following day, we spent some time catching up with the new computer, worked on a few photos, the budget spread sheet, e-mails and blog entrees before meeting up with Dmitrijs.

Dmitrijs made us another coffee and the best hot chocolate in the world at the store before he had to close down.

Afterwards, he took us up on a hotel terrace, to get a great aerial view of the city, he lead us to the “Cultural” pub to have a local beer…or two, from there we went to get a bite to eat with some more local brew, and finally we were introduced to Balzam at another pub. 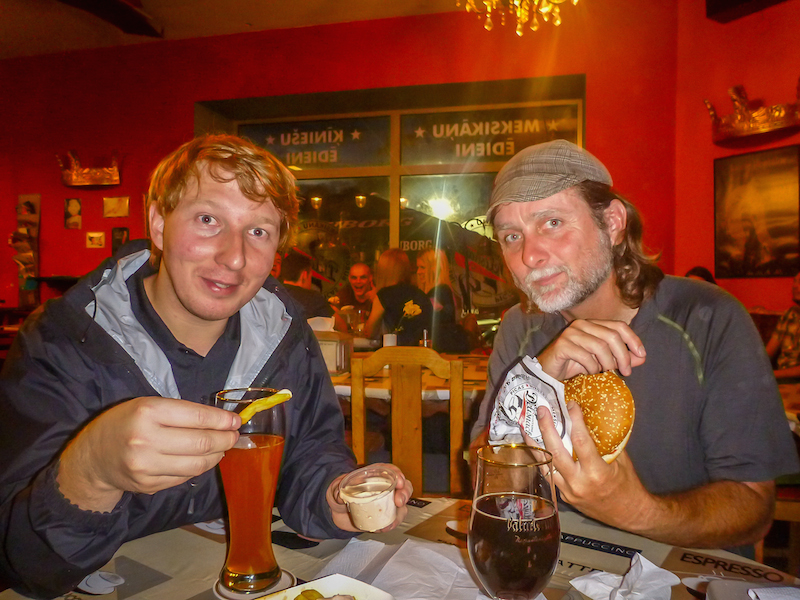 Of course one round had to be repaid by another, we are all having a great time and before we know it we are headed to a dance club with a couple of friends of Dmitrijs’. For the first time ever Ron was not allowed to go into a establishment. At first we thought because of some crazy dress code, but then we were told that the bouncer thought he might have had enough to drink. No worries, there are always other places to buy beer! 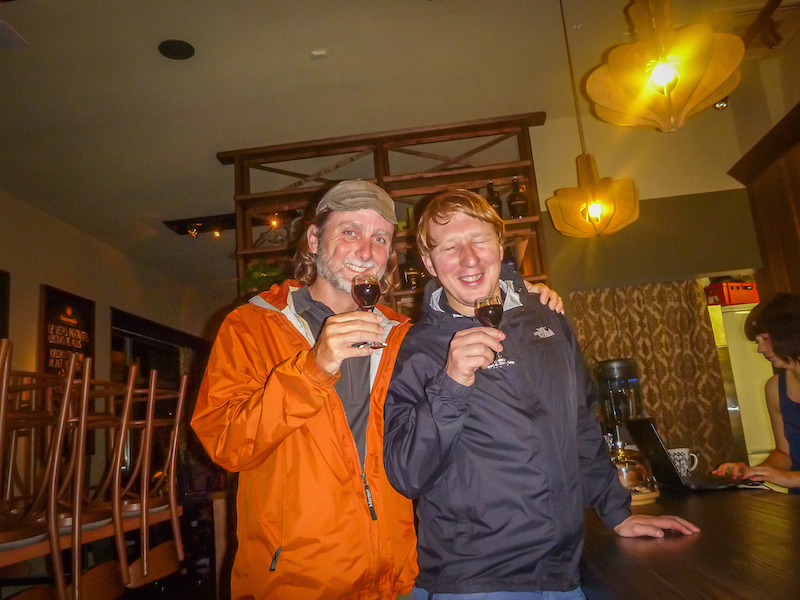 Another dance club was not so concerned and let us in without any problem.

The club had several floors, each one for a different taste of music. We stopped at the one that seemed to play a mix of rock and alternative music…just the right stuff to go along with a few more shots of Balzam. By the way, it is rumored that you have not been to Riga unless you have had Balzam!

By the time we left the place, it was already daylight outside…go figure! We asked Dmitrijs’ friend to point us into the direction of the railway station, because from there I would find our way home to the hostel again. He offered us a ride, but we figured it would be good to walk off some of the Balzam! 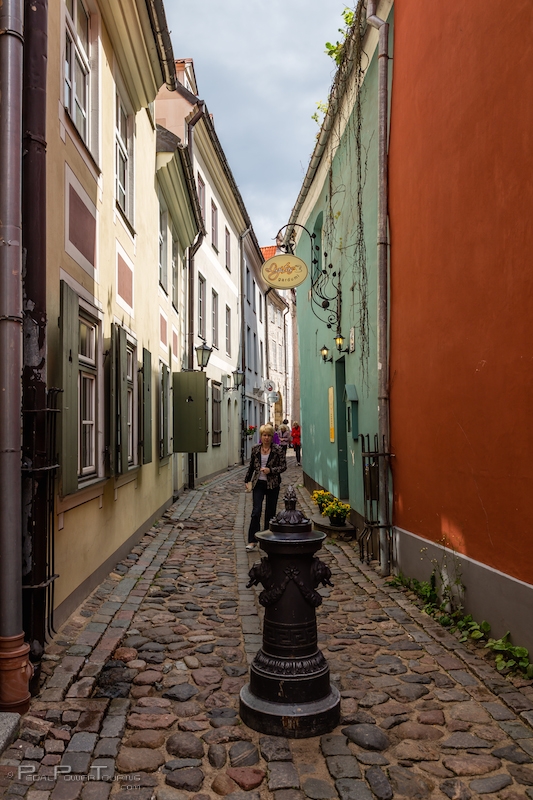 Alleyway in the old town of Riga

After a long walk home, we just fell into our bed and slept…daylight and all. Needless to say, we did not do much the following day…neither did Dmitrijs.

However, we still managed to sight-see a lot of Riga the day after.

We checked out the famous Alberta Street with all of its Art Nouveau architecture.

We meandered through the old city and its narrow cobblestone alleyways. We walked by the Freedom Statue and witnessed some important people lay down a reef. At least all the police, what looked like secret service people, limos and blockades made us believe they were important. We explored several city squares, checked out the central market, and were fascinated by the old tram cars go by.

Before leaving Riga to continue our cycling route through Latvia, we met up with Dmitrijs again, to say our goodbyes. Naturally, just saying goodbye was not good enough for him, so he decided to cycle with us to the edge of town. 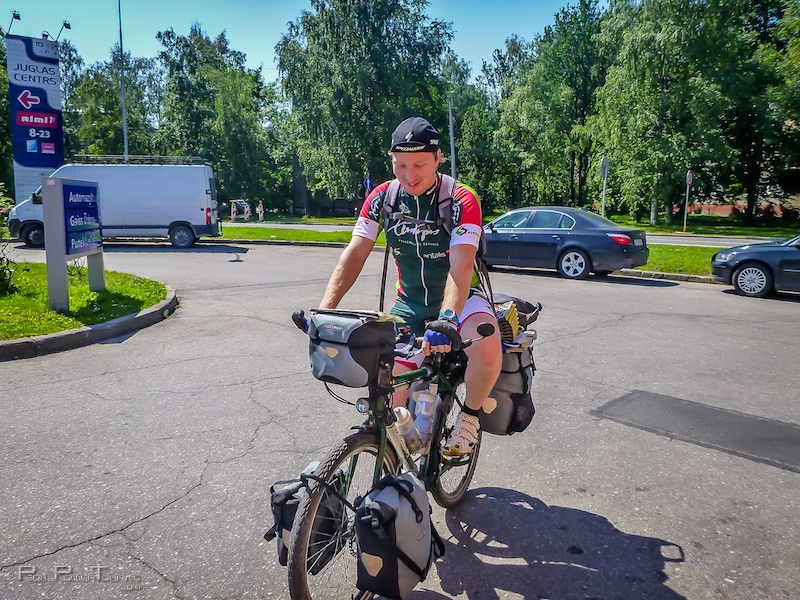 Like that was not enough he gave us two little bottles of Balzam and a small little magnet that kinda looked like him as a souvenir from Riga. What a guy! Thank you again Dmitrijs, we had a wonderful time in Riga, thanks to you. 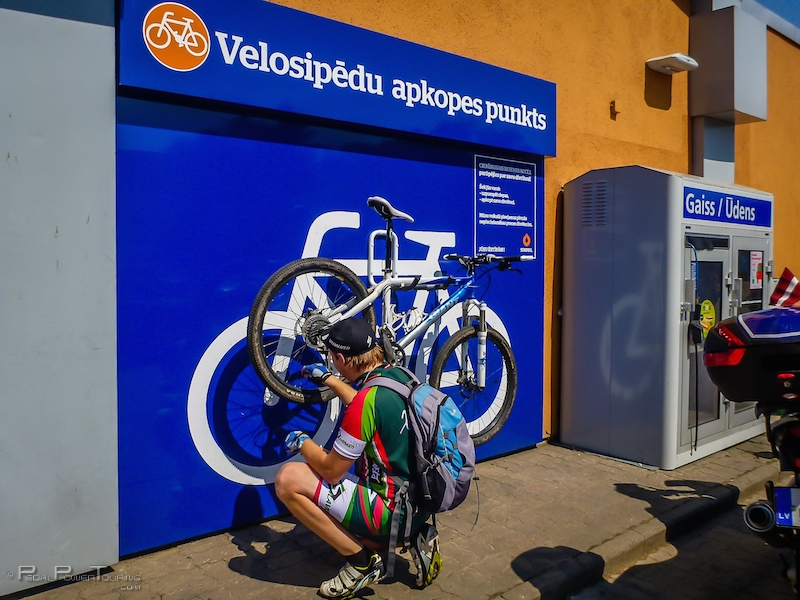 While waiting for Dmitrijs to check his tire pressure at he bike service station, a familiar looking young man came toward us and asked how our ride to Riga was. It took us a moment to recognize the guy from the gas station a few days ago and seventy miles to the south. He was all dressed up and told us he was a little nervous because he was getting married in a couple of hours. What a small world! We congratulated him and wished him and his future wife the best of luck.

After checking our tire pressure at the bike service station and getting more food supplies at the store, we continued our ride north through Latvia.

Our path led us by the coast, past an area of sandstone cliffs and the “Boulder Beach” which was accurately named after the humongous rocks strewn all over the sandy beach. We rode past the biggest beer mug we have ever seen and cycled through peaceful farm and woodland before finding a cozy little campground near the water. Where we got little sleep, due to a big live concert and fireworks going on most of the night nearby, plus it is daylight around 04:00!

Latvia was another surprise country for us. We really had no expectations going into it, but the people, the countryside, and the coastal region have left a lasting impression on us and we would love to come back on another bicycle tour through Latvia.