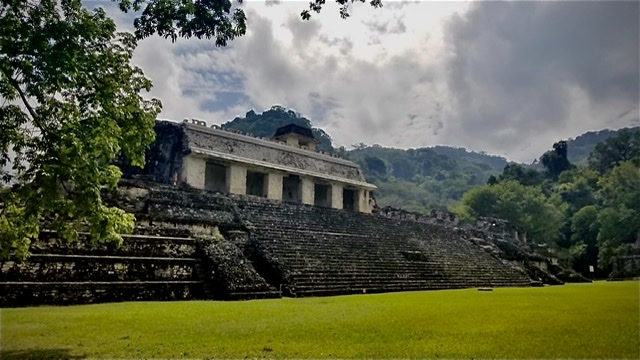 Leaving Palenque apparently is not as easy as we anticipated.
According to the current news, and from what we hear, the road from Palenque to San Christobal is not safe at the moment.
Apparently questionable voting results in a municipality along the way has local villagers up in arms and stopping traffic .

The route in general is deemed unsafe due to frequent robberies. A couple years ago a German and Polish cycle tourer were killed along this stretch…apparently a robbery gone bad.

Just two weeks before we arrived in Palenque there were 3 collectivo buses kidnapped with locals and tourists on board. Luckily everybody was released again after a day or so.
The alternative route to San Christobal is currently closed as the recent weather conditions made that route impassable.
So the only other options we have are either backtrack for a few days and take the long, safe way around to San Christobal. Or we just hang a left and within a two days ride, we should be in Guatemala.
We don’t really feel like backtracking. Although, San Christobal is another magical town, complete with colonial style churches, we feel, that we have seen enough Spanish churches and opt to head toward Guatemala.
We check a few pharmacies to ask where we can get a COVID test, which is a requirement to enter Guatemala.
Eventually, we find a lab that does rapid antigen tests. Since it is already later in the morning and we have to have a test no older than 3 days to cross the border, we decide to stay another night. In the morning we will head to the lab as soon as it opens to take the test and then pedal as fast as possible toward the border.
It’s roughly 93 miles to El Ceibo, a small town where we plan on crossing into Guatemala.
The little delay also gives me a chance to replace my holy cycling pants and my sandals that are falling apart.

In the morning we pack up quickly, grab a coffee and head to the lab.
Unfortunately, we left our room too much in a hurry and Ron forgot his ID. Apparently, he can’t get the COVID test without it. So after standing in line for a while to wait for our turn, the lady behind the desk tells him to go get his ID first and to return.
Luckily, our room is not far from the lab. He is able to return before it even was my turn to have my brain prodded with the test stick.
About 20 minutes later we receive our negative tests. We head back to our room, pack the rest of our things into our panniers, load up the bikes and head out of town.

Unfortunately, shortly after reaching the outskirts of town we come to a screeching halt. A motorcyclist had crashed and police and first responders are everywhere redirecting traffic and tending to the traffic accident.
After the road is clear, we continue on. At first it’s smooth sailing.
Not long after, we encounter another long climb.
A double semi truck is in front of us. He has a tough time climbing up the mountain. At first it seems that we could pass him up. Then he gains a little more speed during the not so steep section.
Ron is able to keep up with the semi. I, on the other hand, start falling behind as other cars pass me by.
Soon the incline get steeper again. Traffic slows down and intermittently comes to a halt as the semi is struggling up the mountain. Unfortunately, the road is very narrow and there is frequent oncoming traffic, so I am unable to work my way closer to Ron again.
Instead I am stuck behind a collectivo pick up truck. There are 4 women a boy and a man sitting in the back staring at me. When I offer to swap my bike with one of their seats I have 6 people laugh at me.
At least after the joke, they still stare at me but with a smile.
Eventually, I reach the turn off where our route leads to the border. Like many times, Ron is already there, patiently waiting for me.
Between the climbing and the heat, we are thirsty and hungry and stop at a small store to take a rest.
As we sit there and drink our coke and eat our sweet empanadas, we watch several guys enter the store.
There is a private security, bullet proof vehicle. 4 security guards exit the vehicle and head into the store. On the other side is a dump truck with two employees entering. Everyone is coming in to buy a six pack of beer and it is not even 11:00 AM yet.

Wondering how many people are passing us in their cars, that have already stopped at various stores to start drinking, we continue our ride.

After a long 50 mile day in the heat, we finally reach a town and find a room.
The light blue shorts, that I bought the day before to replace my riding pants, are all stained brown from my leather seat and I look like I have incontinence problems. So after settling into our room and grabbing a bite to eat I look for another pair of shorts. The only pair I can find is a pair of thick brown man shorts. The girl selling me the pants seems a little confused when I ask to try them on and tells me repeatedly that they are for caballeros. ” Yes, I know, and I want them”.

The next day is our last day cycle touring in Mexico. We get rolling early again in hopes to avoid pedalling in the heat.
We were greeted with mostly gentle rollers.
Around us are lots of pyramid looking mountains, overgrown with jungle like vegetation.
We stop on and off to take in the different views.
Unfortunately, we were forced to take another unexpected brake, thanks to another flat.
Mexico definitely holds the record for flats so far on our adventures. All the debris and the wires from shredded tires along the edge of the road have left several patches on our inner-tubes.
At least this spot was nice and we were able to push our bikes off the road and into a palm grove to fix the flat and to eat a quick banana & peanut butter burrito.

The remaining trek to the border was pretty much uneventful.
The road is nicely paved and fairly quiet and the views are beautiful.

We stopped right in front of the border to spent the rest of our peso-coins on coke and cookies before crossing over.
Checking out of Mexico was easy. All we have to do is wait in line. The border agents are super nice. They tell us where to park our bikes. Then they even check out our bikes and ask us about our travels. Stamping out of Mexico was fast, we spend less than 2 minutes in the actual office.

Afterwards , we push our bikes through no-mans-land to the Guatemalan side.
As we are about to head into a small trailer, which we thought was the border control office, a guy in civilian clothing with a pistol in his holster tells us, that the office is actually behind the trailer.
We quickly push our bikes over. Park and head, one after the other, into the office.
The officer is very nice, speaks English and welcomes us to Guatemala.

He advises Ron to go to the next town to stay the night. According to him, there is no electricity in this small border town.
As soon as we cross the border, we stop at a small store to exchange our last Pesos into Quetzales.

Since it has been another hot riding day and it’s already late in the afternoon, we decide to stay in town anyway as we pass a hotel.

Apparently the electricity is on for now. Yet, the whole town shuts off from 10:00 at night until 6:00 in the morning.

I talk to a lady working at the hotel. She asks if we want a room with AC or with a fan. Since there won’t be any electricity to run the A/C during the night anyway we opt for the room with fan. After some back and forth of the bikes being allowed or not allowed in the rooms, she finally gives me a price of 200 Q for the night in a room with fan.

However, when it is time to pay, another lady, who actually appears to be the manager, the price suddenly jumps up to 250 Q for the might.

Although we tell her that it only cost 200 we end up paying the higher price. After all our kindergarten–Spanish is just not sufficient enough for a good argument.

Maybe we should have followed the advice of the border agent after all.