Posted at 06:20h in Morocco by Petra 2 Comments
0 Likes
Share

Day 66 & 67 (14 /15 May 2013) – After another huge, tasty breakfast, we pack up and head south deeper into Morocco. We are going to cycle along the Moroccan Atlantic Coast. The way out of town is a little nerve wrecking initially. There are many trucks, an abundance of petit and grand taxis, and lots of little scooters and tuck-tucks trying to claim their space on this road, not 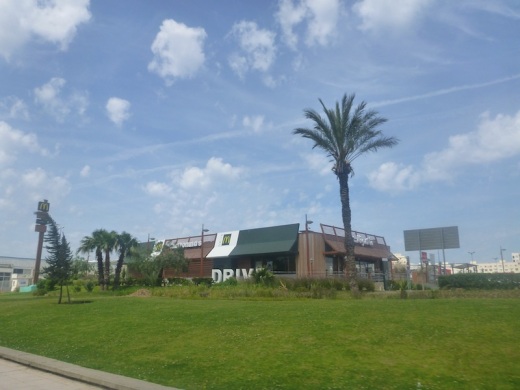 to mention the many pedestrians and occasional cats and dogs scurrying in between the vehicles. Amazingly, everybody still seems to watch out for us and leaves us plenty of room on our bikes, so we never actually feel threatened amidst this chaotic traffic. Once out of town, our route takes us along the Moroccan Atlantic coast. As the traffic dies down a little bit we find a way out to the water to take a short break. We push our bikes onto the beach, and to our amazement we see miles and miles of sandy beach to the left and to right without spotting another soul. The water shimmers in different shades of blue and turquoise, with some white waves hitting the beach. 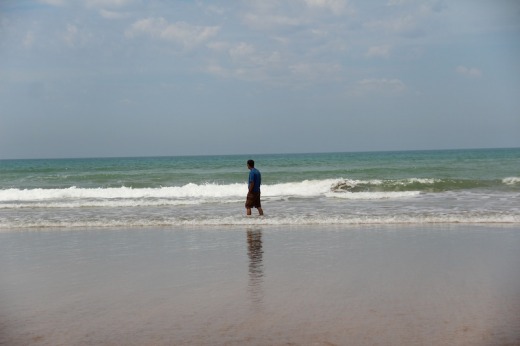 After our short break, we continue on the road paralleling the coast. It takes us mostly through flat farm land, through some small villages and occasionally we sneak more views of the Atlantic. Eventually we ride through another small town, where we stop next to the beach, to eat our bread. We watch people play soccer at the beach and marvel over a couple of camels that are resting along the water as well. 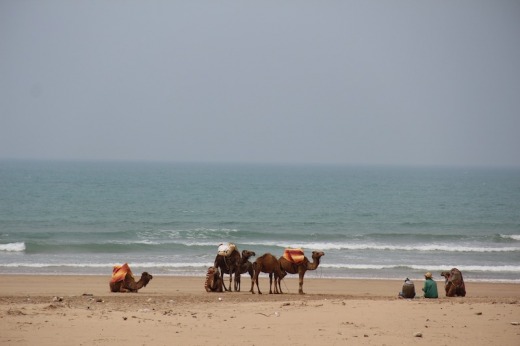 As it gets later in the day, we try to find a spot to set up our camp for the night, so we take a turn off the main road toward the water. Initially, we thought it would be an easy task to find a place maybe closer to the beach, between some of the fields, or behind some shrubbery. However, as it gets later we see that every field seems to have somebody walk through it, tending to it, or have some sort of shelter set up in it to guard the crops for the night. Since sundown is getting closer, we stop and ask a woman herding her cows, whether it is alright to set up camp in the grassy field next to her cows. She indicates, that the field is not hers and points down the street, as to continue on to find a camping spot…so we keep riding. 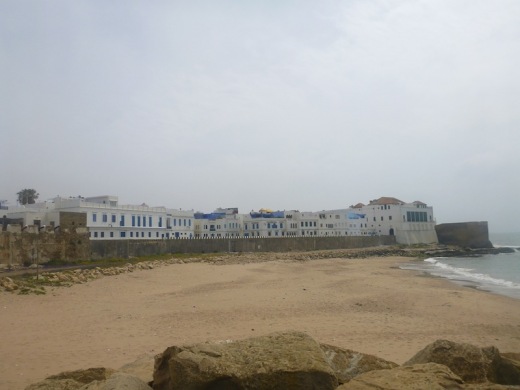 It is getting dark and there are still more people wandering in the dark through fields–some on foot, some on horseback, or horse wagon…Doesn’t anybody sleep around here??!!

We continue riding and notice some well built bus/taxi shelters along the road. Since we are getting hungry and tired, we stop at an unoccupied shelter to eat; and once our bellies are full, we decide just to go ahead and sleep in the shelter, plus it’s after 22:00 at this point. We put on extra clothes and slip into our sleeping bag liners to stay warm. During the night a couple of people walk by, a father and child (past midnight), a man and his dog…nobody gives us any grief or bothers us. 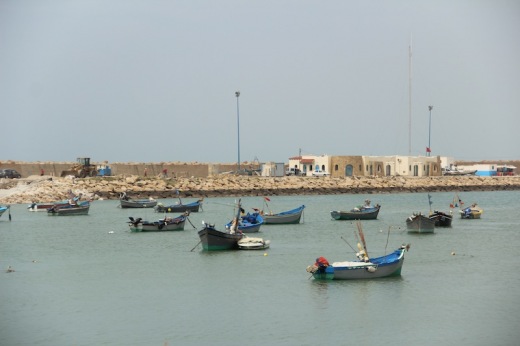 In the morning we wake up to light rain, a man stands next to the shelter, waiting patiently for his Taxi. We quickly move our bikes to make room and invite him into the shelter. He shares a couple hands full of fresh peanuts with us, that he has grown in the field right in front of the shelter, and we share our coffee with him. In some broken French, Spanish, German, and English we learn about the bus and taxi system around the area, he tells us about his family and eventually jumps into a taxi that seems already full and waves us good bye.

The wind has picked up considerately, it was already strong yesterday, but today it seems determined to slow us down even more.

We ride along the small but somewhat busy street until we find an even smaller road, a mixture of dirt, gravel, potholes, and occasionally paved, to connect us back to the main road we were initially on the day before. Trying to find a spot to sleep last night took us way off course, so we had a lot of backtracking to do. At least on the dirt road traffic was sparse, only seeing a horse drawn carriage or farmer riding his or her donkey.

At some point we were able to see a couple of villages, and as we turn the corner we notice that we are approaching a market in the middle of nowhere between those villages. People gather together on foot, horseback, riding donkeys, or horse-carriage to buy and sell goods. Fresh fruit and fresh meat hanging along the stalls are for sale every where, colorful spices are available, some clay pots, clothes, and shoes are for sell as well. We see people standing in line at the smith to get their horse’s shoes tended to. We somewhat look like aliens among the scene but besides giving us some curious looks nobody really seems to care, after all it’s Morocco. So we ride through the market buy some orange juice and a few muffins and take a break to take in all the new impressions, before continuing on. At some point we stop in a little town to get lunch. It is obvious, that we are the only Westerners present. The owner of the small place tries to tell and show us whats for lunch. He grills chunks of lamb meat with vegetables next to our table and serves us a huge amount of food, beans, and bread. There is no silverware in sight, so it took us a moment to figure out how to eat all this delicious food with our hands…the Arab way. 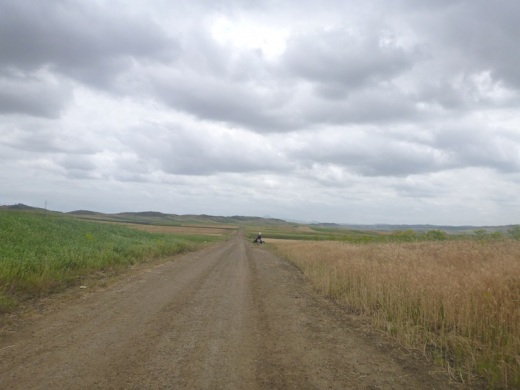 Eventually we make it back onto our route. The road is busy and noisy. Truck- and car-drivers ride by honking their horns, wave to us, giving us thumbs up, and the peace sign. People along our way greet us, wish us well and wave to us. We have never waved that much in our lives! As we approach other small towns along the busy street we notice much more garbage. It seems customary at some towns to just use the outskirts as dumps. We pass huge amounts of trash with people walking among it, children playing in it, and donkeys standing in it as we find our way into the towns. Private trash pick up in a poor area does not seem to be lucrative business! 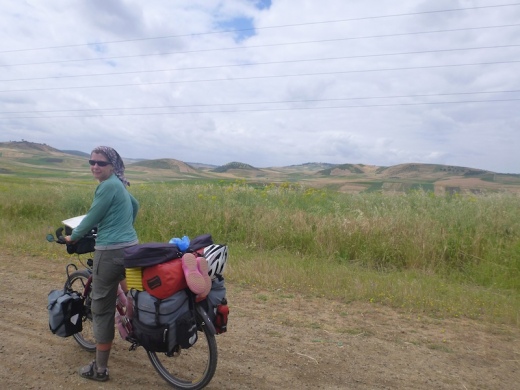 Since it is getting late again, and we were unable to find another spot to wild camp among the farmland, we decide to stop and get a room for the night. The only option was another trash filled small town with 2 hotels opposing each other along the road. Both hotels were over priced and have not seen a mop for months. The toilets and showers were broke, had no lids, and hot water was non existent. More than likely, the usually tenants pay hourly and not a nightly rate, but at this point we were exhausted, tired, and felt we have no other option, so we chose the better of the two evils to stay the night and get some rest. We slip into our sleeping bag liners and wrap them around us like cocoons and fall asleep. 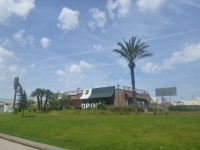 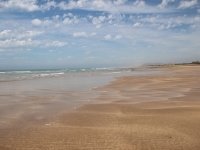 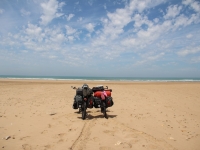 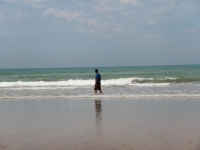 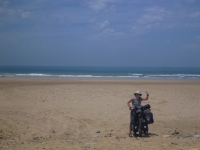 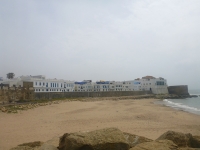 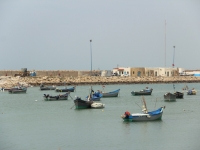 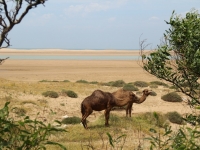 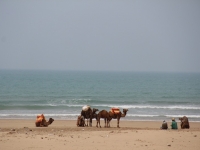 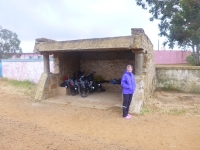 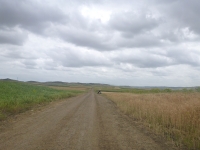