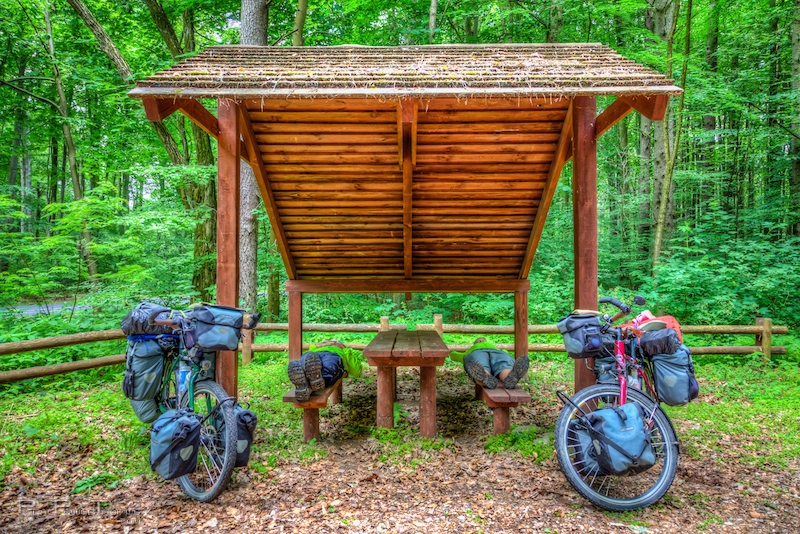 Posted at 05:26h in Poland by Petra 0 Comments
0 Likes
Share

For the next few days, we continued bike touring through Poland and slowly worked our way east across Poland to reach the Lithuanian border.

The riding was fairly easy along quiet, paved country roads that led through several small villages and past unique half timbered churches. 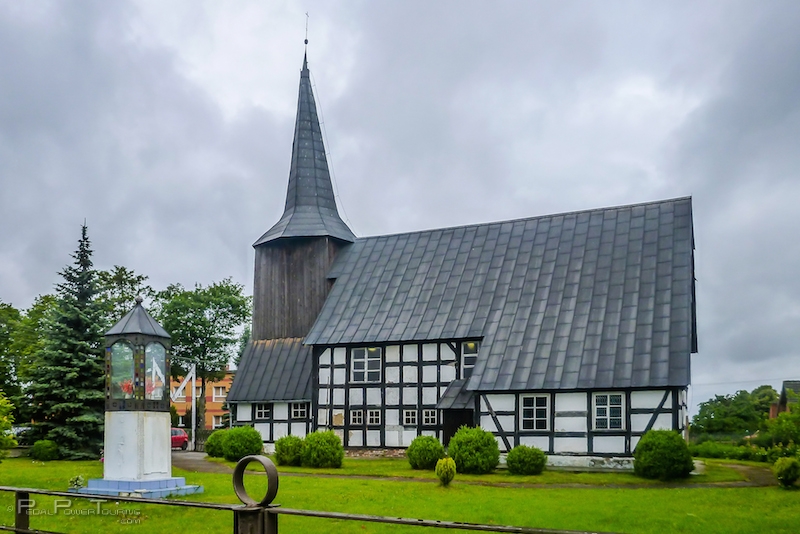 Half timbered church in a small Polish village

Unfortunately, the weather was not so fantastic. Actually, the weather was quite unpredictable and unsteady. We never knew what the next 10 minutes would bring. One moment the sun was shining and it was so hot that we wanted to ride in shorts and t-shirts. The next moment the cold wind picked up and made us shiver, and before we knew it, we were pelted by rain. Shortly after we found shelter and donned our rain gear, the sun beamed down again and we had to peel off everything again because otherwise we would have melted in the heat again…crazy! 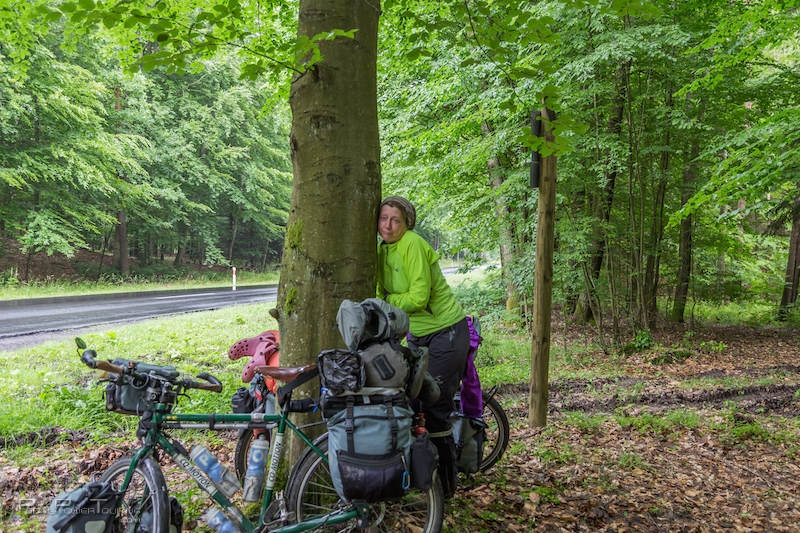 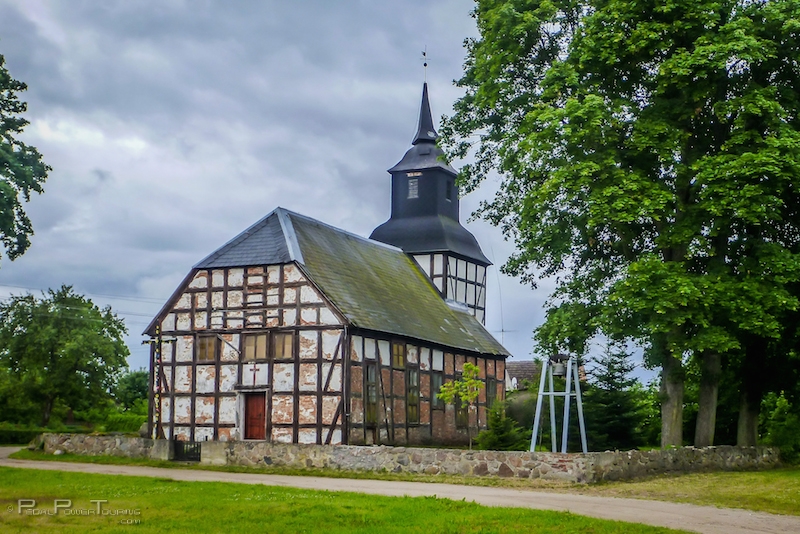 Another half timbered church along our route

We did, however, manage to find a few wild camp spots in the beautiful woods of Poland and miraculously the tent stayed somewhat dry before tearing down camp in the mornings. 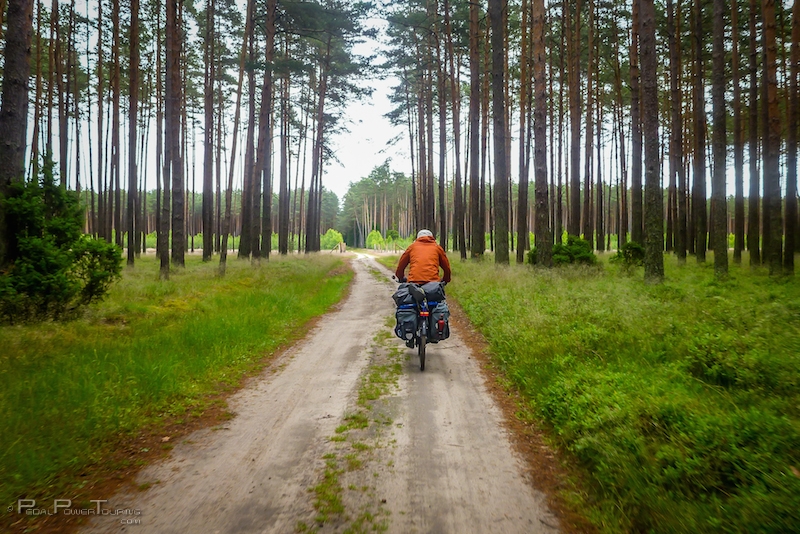 Our path through the woods, while looking for another wild camp spot 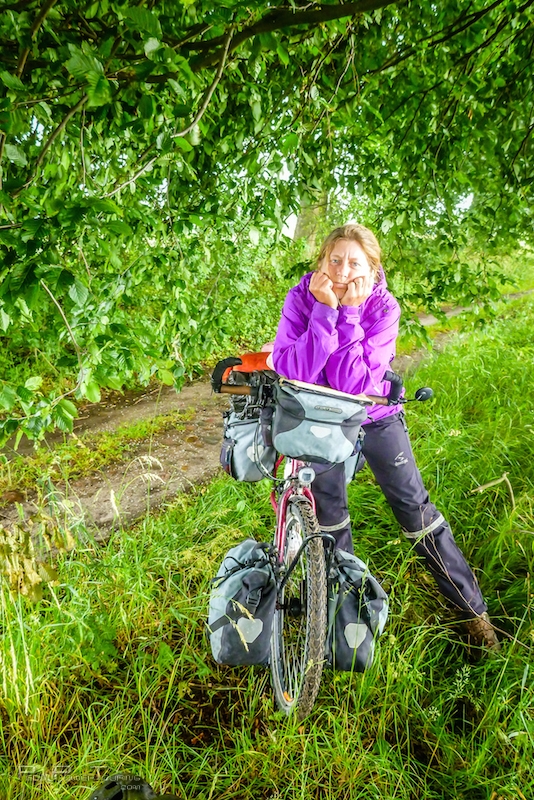 To stay off the busy roads, we took some detours. Unfortunately, we did not realize that the dirt roads are very sandy. Mix the sugary sand with lots of rain water and we get a nice slippery ride up and down a few small hills. Luckily, most of our route was pretty flat, so we were able to ride most of the slick paths. 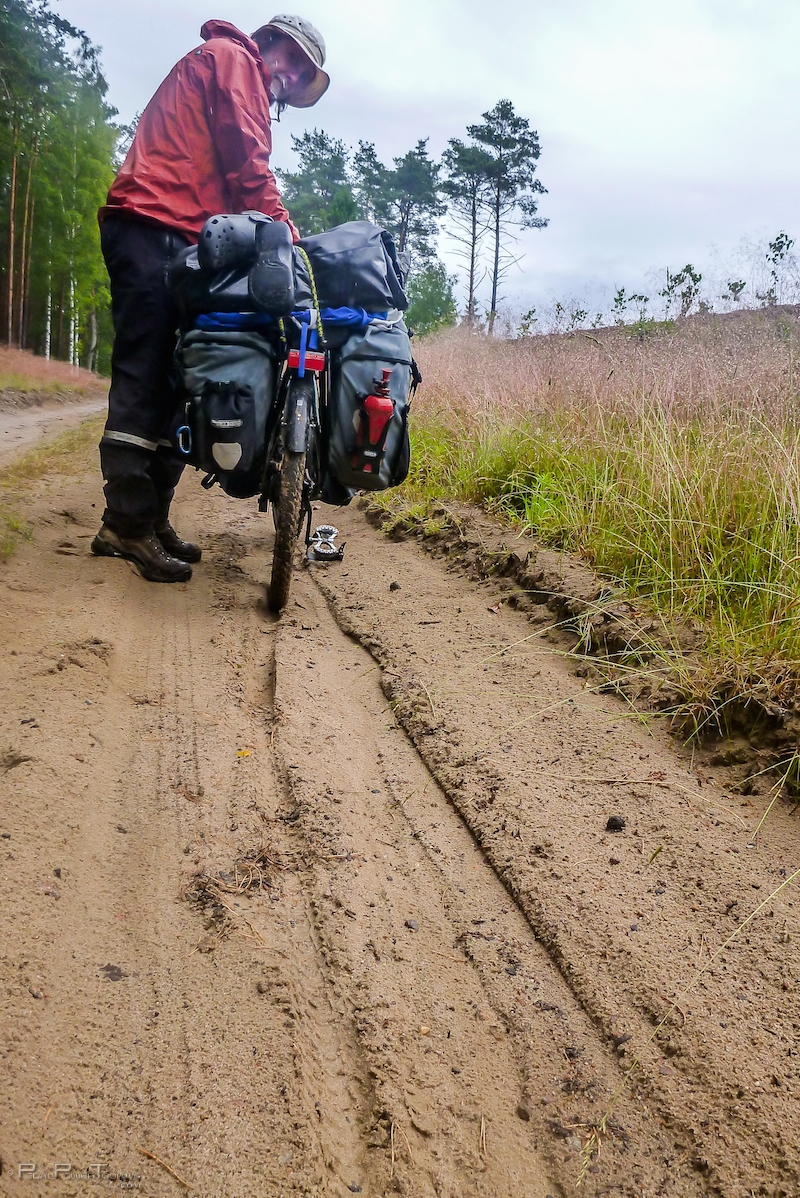 While riding through Augustow, Poland, we finally spotted a bike path sign for one of the Eurovelo routes that leads from Greece all the way to Norway. Unfortunately, it was going to be the one and only bike route sign, we ever saw in Poland. It would have been nice to maybe follow the route a little bit further. 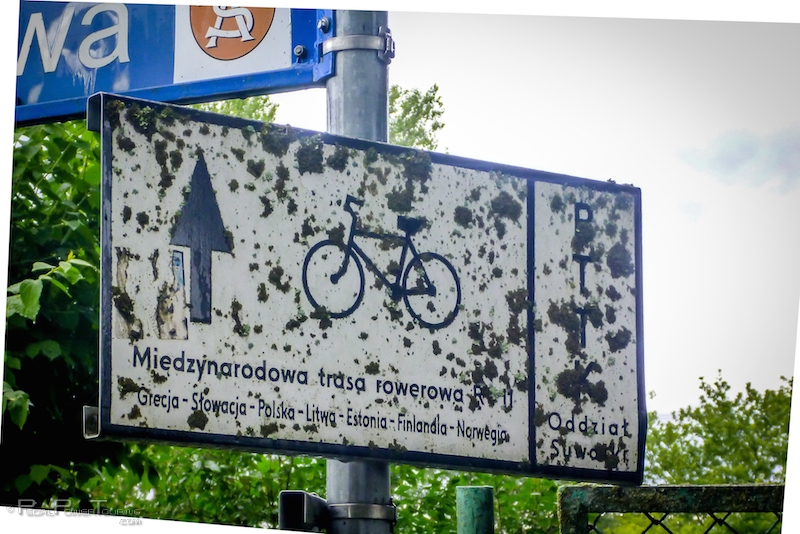 The only sign of the R11 that we have seen. No idea where it came from or where it goes

While in Augustow, we stayed at a little campground, that had great reviews, but was not really all that dandy, unless one likes semi-cold showers and witness a group of gipsies pretty much trash the place. At least the owner had a word or two with the group and had her crew tidy up the place again.

We also met Derek and Asia at the campground. The two are on a short vacation in the area and are traveling by bus/train and backpack. They were also very interested in possibly bike touring one day and had a lot of questions about our adventure and our bikes. They were not sure about having front paniers and thought it would be a little awkward to ride a fully loaded bike, so Derek was happy to give Ron’s bike a try. 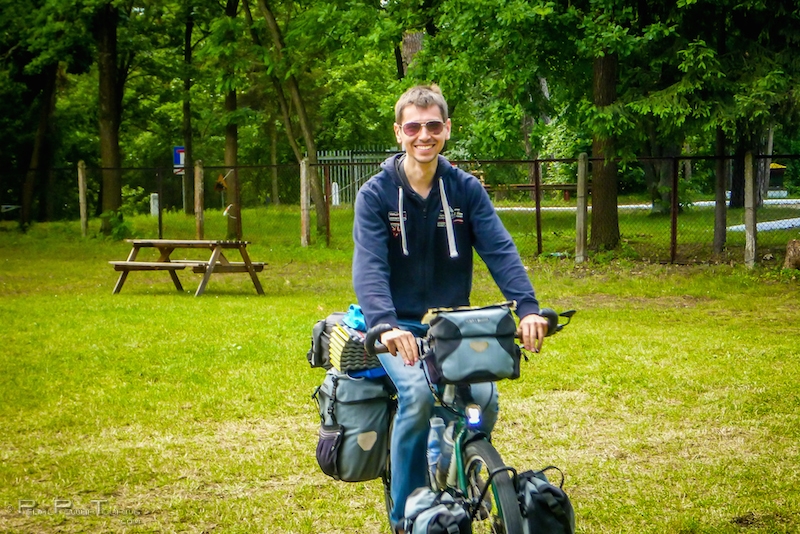 Check out that smile! Derek trying out a fully loaded bike for the first time

Our laptop had died on us a couple of days ago so we tried to find a Computer store in town to see whether they could help us out. We were told though, that the next Apple service center is either in Riga or Valnius, that did not make us very happy. 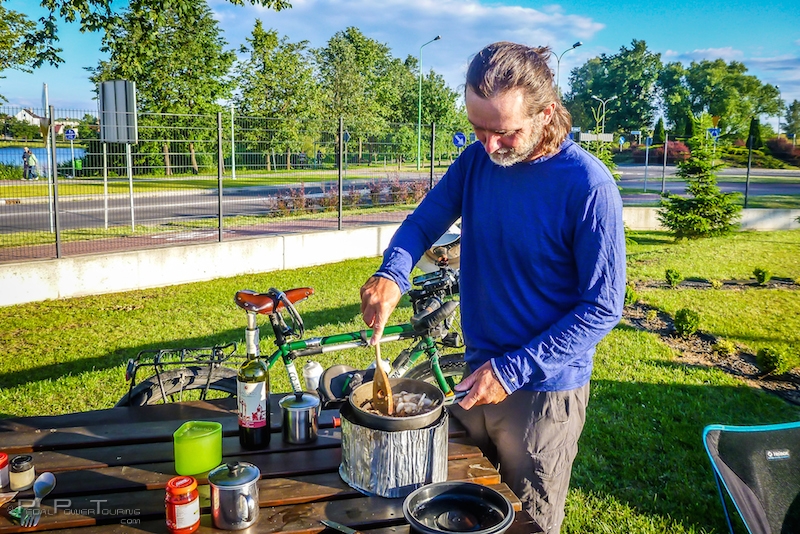 Once in Suwalki, we tried our luck again to find an Apple dealer, but unfortunately, we were told to keep riding to Riga again. However, while in Suwalki, we did have the opportunity to meet probably the worst business man in the world. When we rolled into town, we stopped at the first and what we thought was the only campground in town. We spoke to the owner, got the price for the night and then we let him know that we were going into town to look for a store that might be able to repair our dead computer and if we would find one, we would return for the night. Well, we did not find anyone that could work on our computer.

In the meantime, we did discover another campground that was run by the city and it was much nicer and happened to be the same price as the other campground, but we like to support the “little guy” when possible so we returned to the private campground. After returning to the private campground, the owner says that he made a mistake with the price and that is was going to cost us 5 Zloty (about $1.75) more. Ok… not a big jump in price, but he did give us a price earlier, so we asked if he would take the original price, plus it was a nice round and even number. At which point he flipped out on us and said it would be better for us to just leave and go to the other campground in town.

This guy was either very rich or very dumb, maybe both because his place was totally empty; whereas, the city’s campground was about half full! Needless to say, we peddled back into town about 1 mile to the very nice, new, and cheaper campground where we stayed for two nights!

While exploring the town we found a great public bike-service station right outside a shopping mall. Complete with stand, pump, and tools…wouldn’t it be nice to have more of those around?! 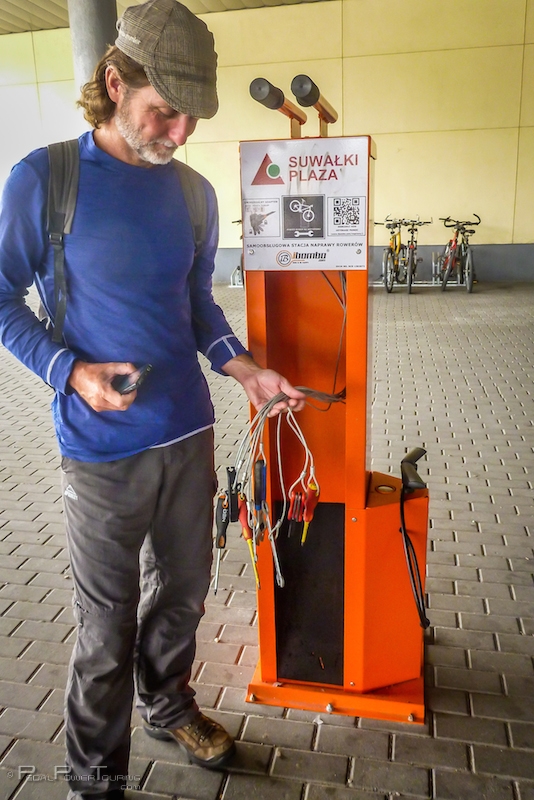 Before leaving Poland, we actually managed to cook up a great Polish meal: Perogi, Kielbasa, and veggies. Smacznego! 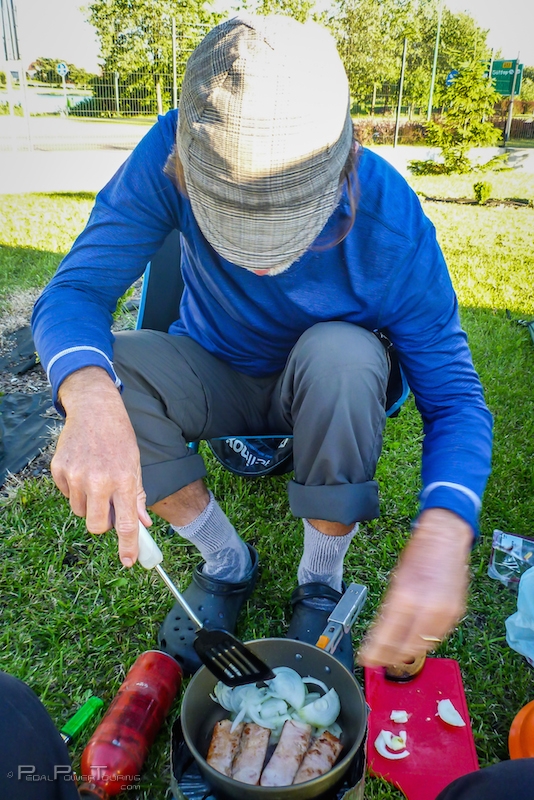