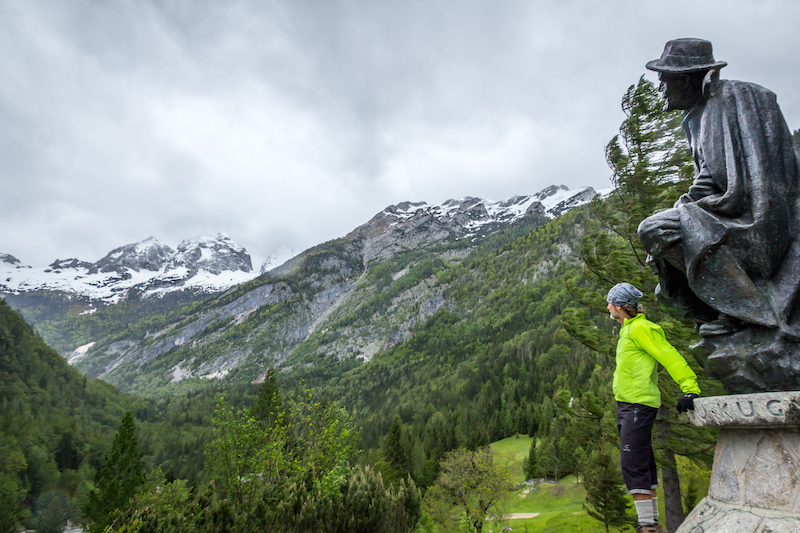 Posted at 07:03h in Slovenia by Petra 0 Comments
0 Likes
Share

Dejan gave us plenty of time before needing to meet up with him again at his family’s house in the Soča Valley. Obviously, he knew that the route there would be absolutely amazing and that it would take us some time to ride the few miles. He was right. There were a few more historical sites, an old WWI military graveyard, and of course the beautiful Soča River to discover on our way, which turned the 9 mile ride into an 2 hour ordeal of ‘Oohs’ and ‘Aah s’. 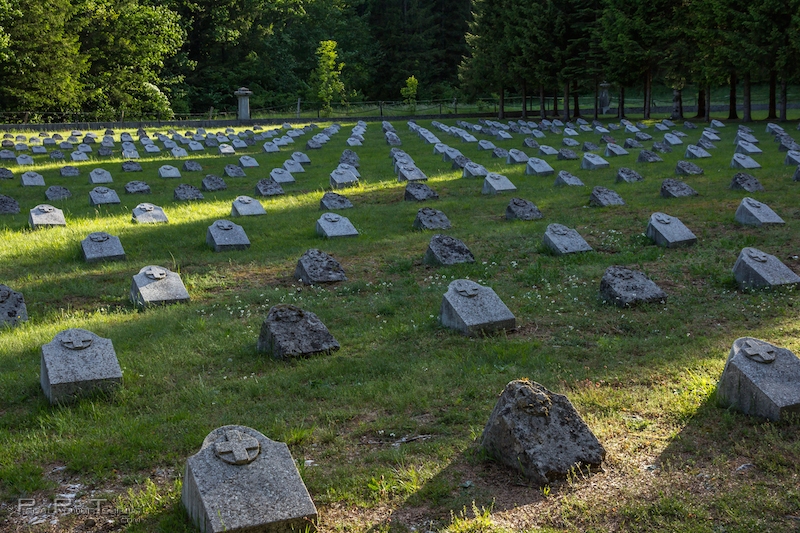 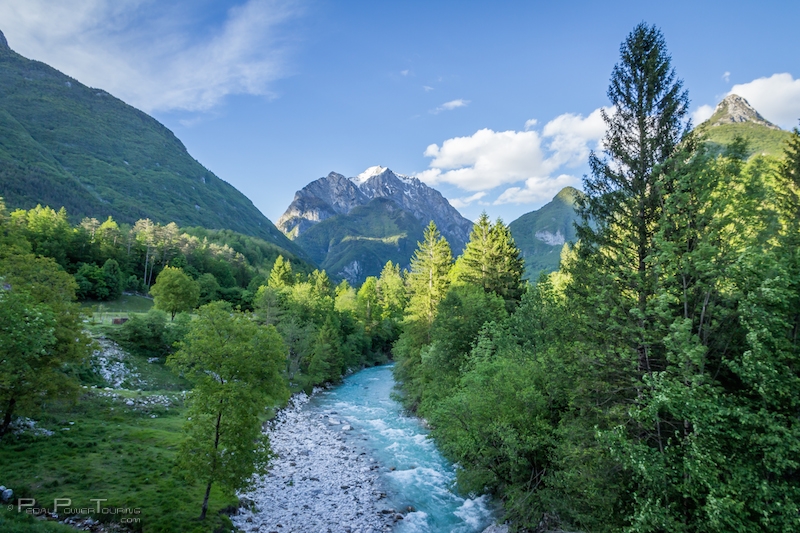 The area was so beautiful, that we wished we could stay a little bit longer in the valley to explore more of it. With all the stopping and not getting enough of looking at the stunning turquoise colored water, we barely made it to the house after 2 hours. The time seemed way to short for the few miles and it made us  wonder, how great it would be to do at least a day hike in this area.

You can’t see it, but the bridge swings with every step

Once at the house, Dejan greeted us with a friend of his and a couple of cold beers. We had a great time chatting about the area and different travel adventures. Dejan likes to take his Motorcycle all over the world… at times we think, he might have the right idea… traveling by motorcycle would definitely be much easier, especially when going over all the mountains we have encountered. But then we thought, it might be a little bit too fast and we would have missed out on a lot of the interactions with the people we have met along our cycling adventure. 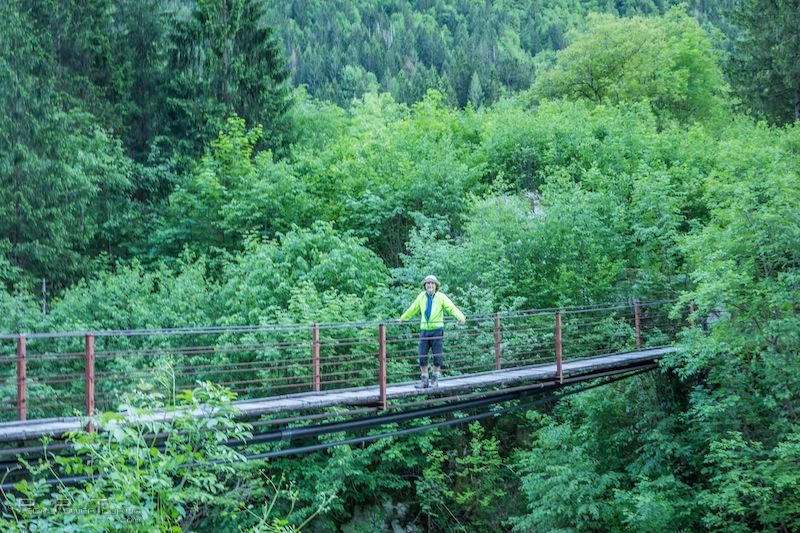 Dejan also showed us all we had to know about the house, where to sleep, where to find the main power switch, and where to get water from the river.

Initially, we thought that the water was only turned off, because he was in the middle of renovating the house. But we came to find out, that the house used to have running water coming from the mountain when his grandparents still lived there. However, an earthquake in the 90’s pretty much destroyed the house and somehow changed the water flow in the mountain and ever since then there has been no running water to the house. Interesting! 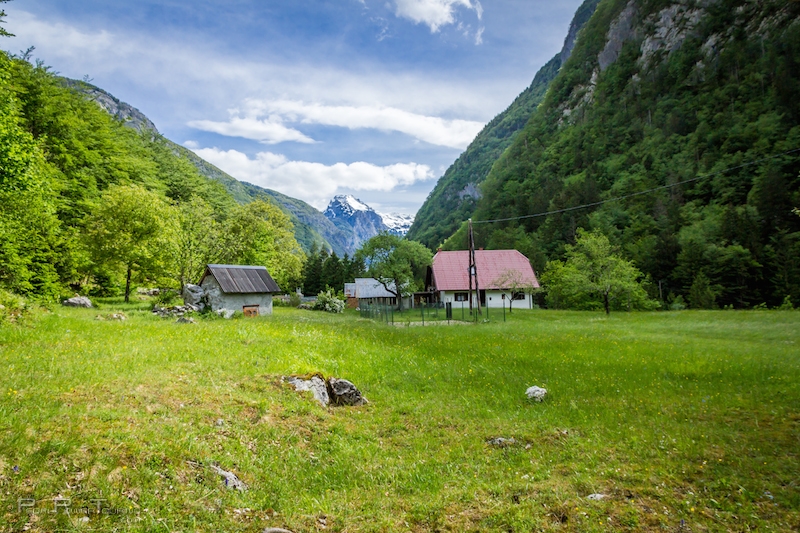 A great place, we were invited to stay at for two nights, while waiting out the strong winds

As we kept hanging out in front of the house, we noticed that the wind started to pick up more and more. The temperature also went from comfortable to quite chilli and before we knew it started to drizzle.

Before Dejan and his friend went home for the night, he told us if we leave in the morning, just to place the key at a special hiding place. He also added, that it would be no problem for us to stay for another night if we would like to explore the valley more.

Not wanting to impose on anybody, we told him ‘thank you very much for the offer’, but that we’d get going the next day. 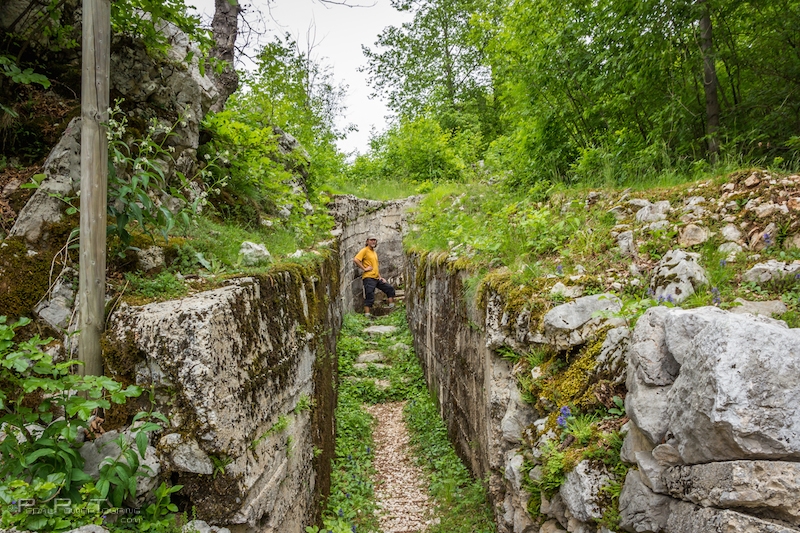 During the night though, the wind picked up more and more. It howled around the corners and rattled everything around that was not tied down. In the morning, the wind was still ripping through the trees around the house and made quite the ruckus. When we went outside to get water it just about pushed us over. Going over Vrsic Pass with fully loaded bikes while facing such strong headwinds did not seem like a good idea.

Even after waiting a couple of hours, the wind still whipped relentlessly through the valley, that’s when we decided to take up Dejan’s offer to stay another night. 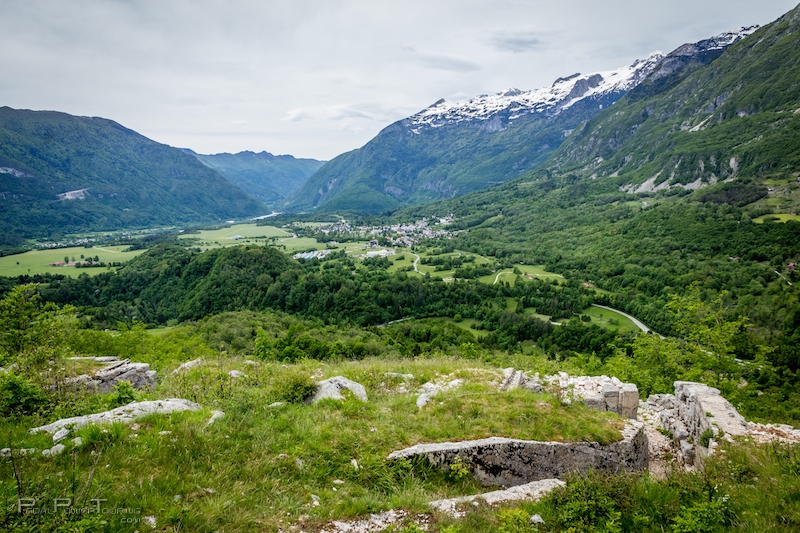 The view from the WWI front line down to Bovec

Shortly before lunch time, the wind still did not stop, but at least it calmed down enough for us to ride back into town to buy food supplies. We left a note on the kitchen table for Dejan and rode into town. Once in town, the Sun peeked out from behind the dark clouds and the wind calmed down enough, where riding was enjoyable again. That’s when we decided to stop by an old WWI bunker on our way back to the house. 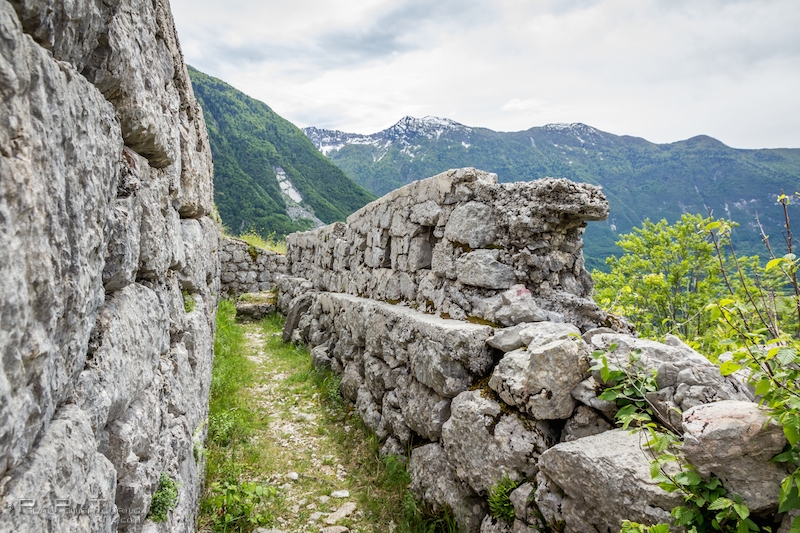 The old front line was located right along the mountain ridge. Once we made it to a small village where the path to the bunkers started, we parked our bikes behind a farmer’s barn and hiked up to where soldiers defended their lives in trenches and bunkers. 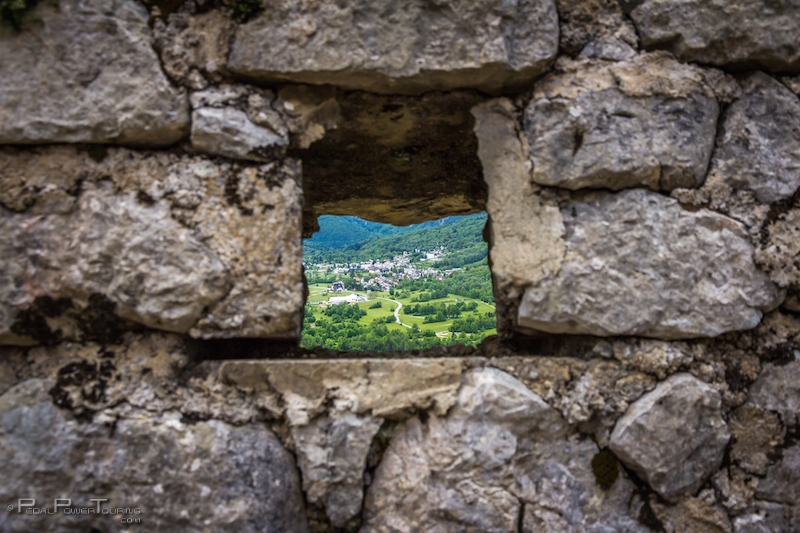 view from the trenches down to Bovec

There were still several entrances to the underground bunkers and trenches. Luckily, we brought our headlamps to explore most of them. 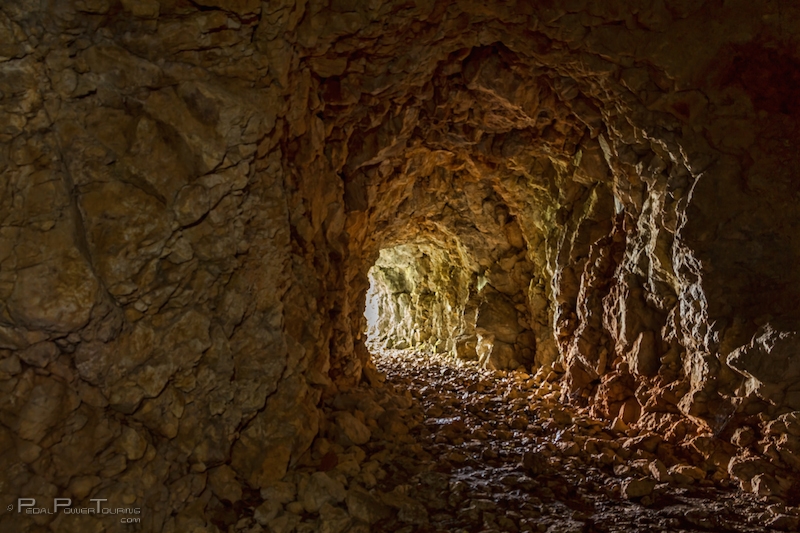 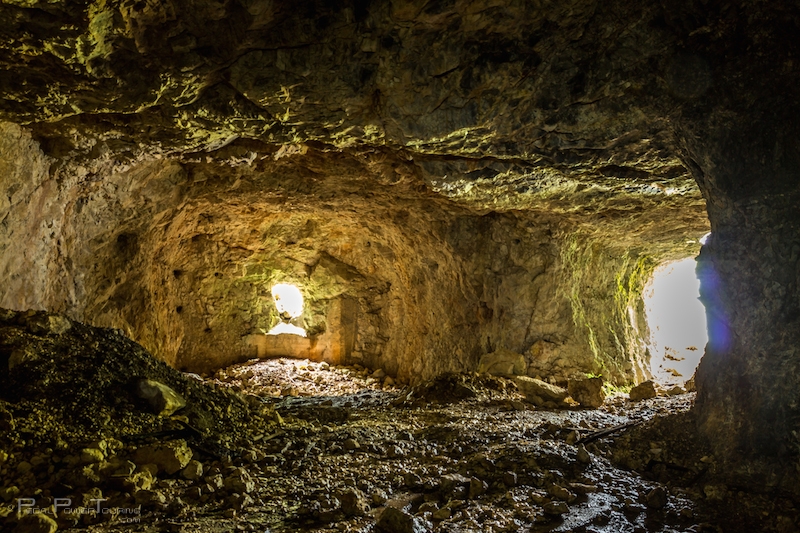 After checking out every nook and cranny of the old military site, we hiked back down to our bikes and decided to take a few more detours on our way back to the house.

Dejan had told us about a few especially stunning places along the Soča, where the powerful river carved out small, deep canyons in the rocks. 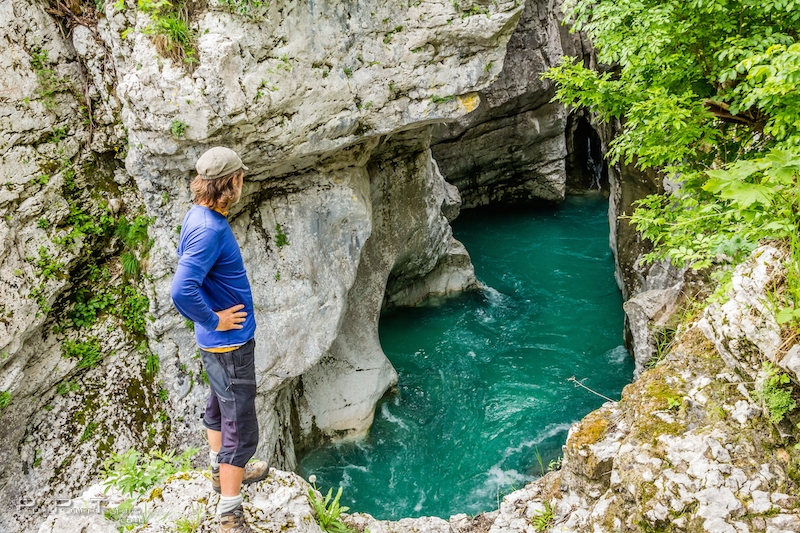 Admiring one of the Soča canyons

We made sure to visit as many of the beautiful places as possible in such short time. 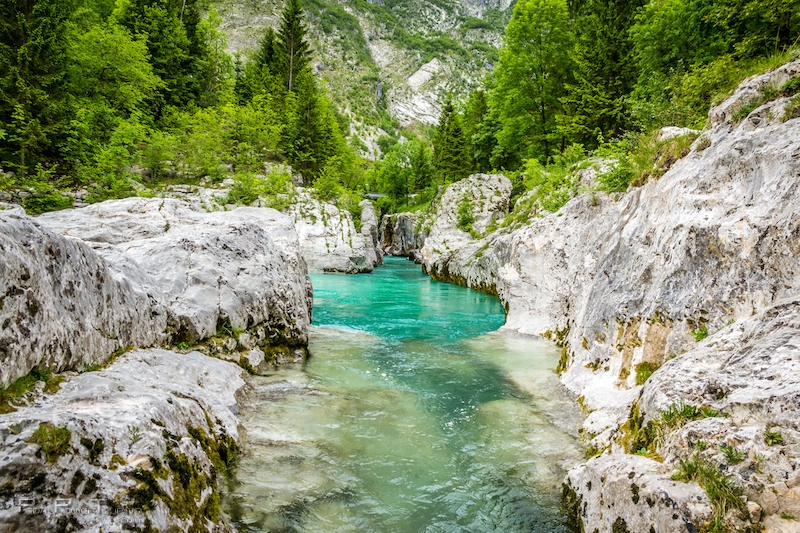 While stopping to get water from a fountain at a church, Dejan drove by in his car. He just got off work and was checking on the house and he was happy to see us exploring more of his home country. He also warned us that there is more bad weather coming our way. Apparently, the wind was expected to pick up even more and there already had been reports of roofs being blown off on the other side of the Vrsic Pass. He even offered for us to stay in the house as long as we needed to. We were very thankful for the offer and invited Dejan over for another beer and told him he is more than welcome to join us for one of our one-burner-meals. 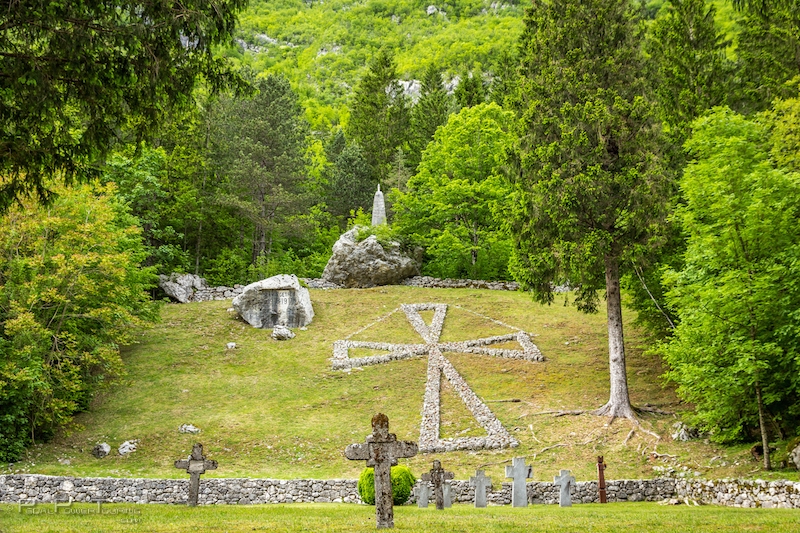 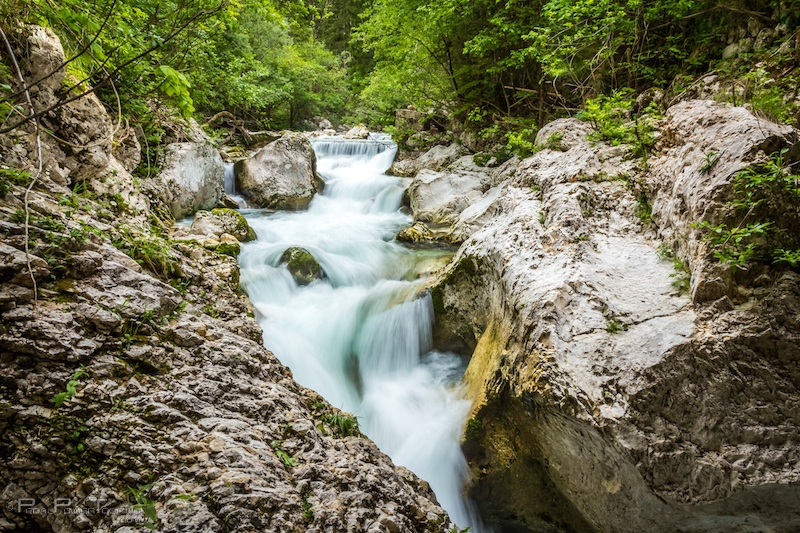 Later at night, he returned to the house with homemade cake and sausages: greetings from his family. They wanted to make sure we had enough to eat. He also explained to us that the way the sausage was made is unique to the Bovec area and that we would not find it made like this anywhere else Slovenia.

That night, the wind picked up again. It ripped around the house with a vengeance. In the morning, it was still drizzling and stormy as well as the electric was out. Later we discovered there were many trees blown over, so apparently somewhere a tree must have taken out the power lines.

We decided to wait a couple more hours in hopes that the wind would die down again like it did the previous day. We kept going outside several times to feel how strong it was blowing. 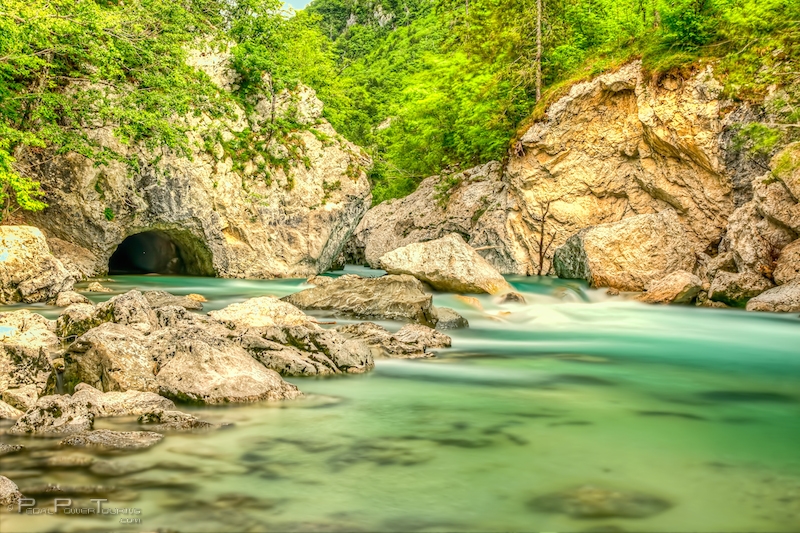 Around noon time, we decided to pack up our bikes, put our rain gear on and to brave the weather.

It was still windy and raining, but we thought we would give it a try. At that point we were not even sure, whether the pass was even still open… if it was raining here, it would most likely be snowing on Vrsic Pass. But if it came down to it, we knew we could turn around and stay another night in the house.

We hid the key and pushed our bikes down to the road. From the house on, it was pretty much all uphill. Luckily the initial few miles were very gradual uphill, but the headwind made up for it. At times the wind gust came so quickly and from unpredictable directions, that we had to stop for a moment, otherwise it would have blown us right over. 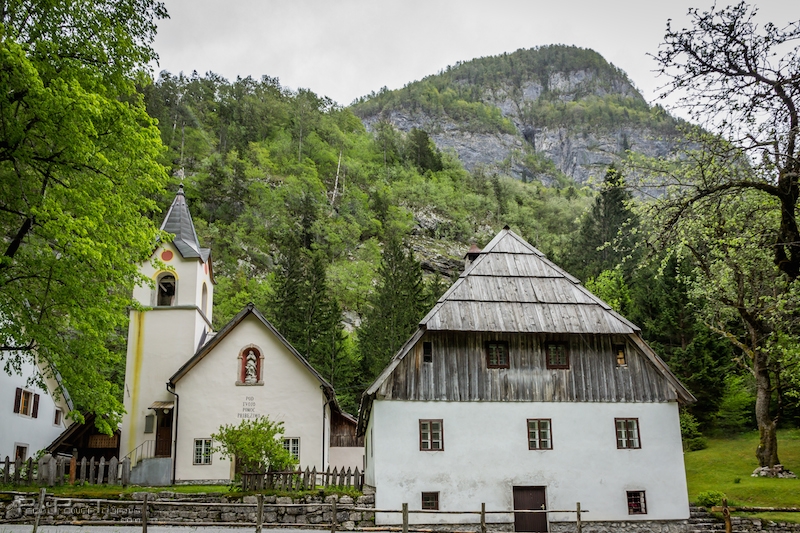 As we get closer to the actual pass the weather started to improve; however, we started to hit switchback after switchback and the gradual incline had been replaced by an exhausting 14% climb. 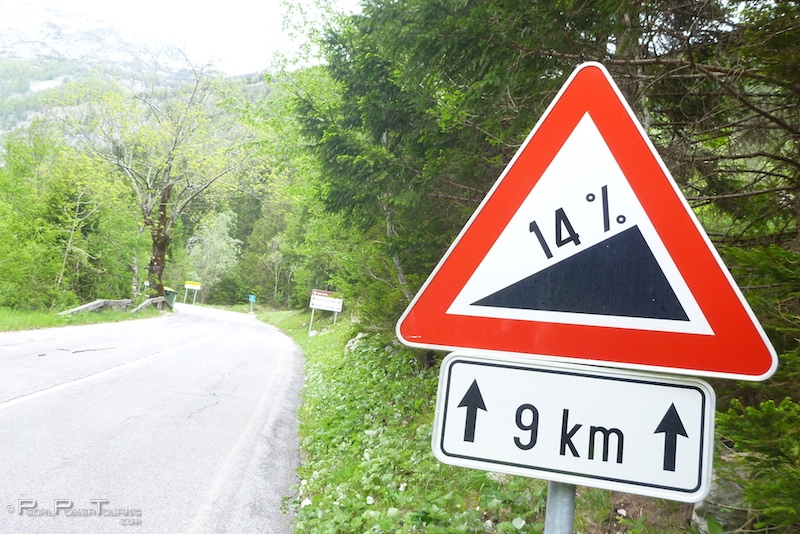 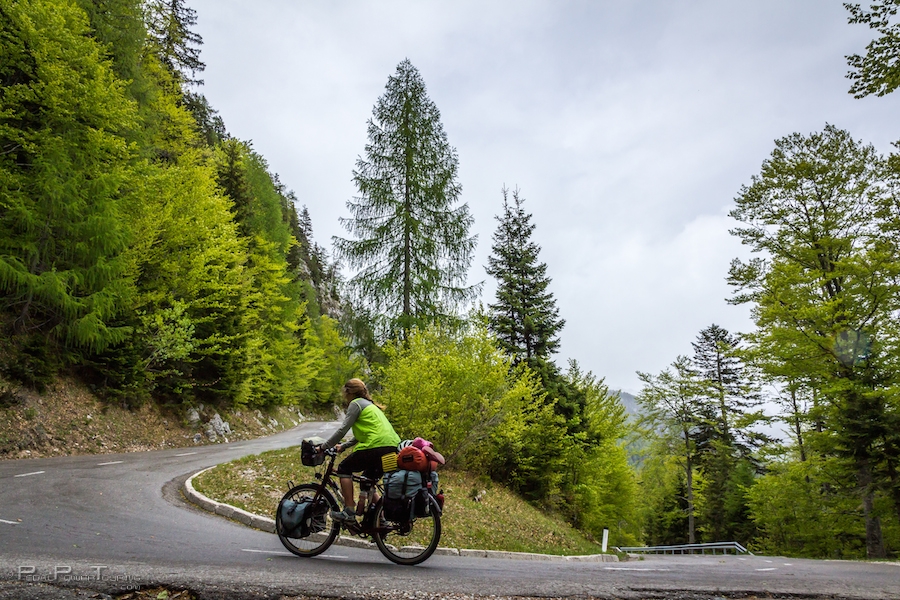 Thankfully, the scenery was absolutely amazing and made up for all the hard work. On the way up we rode past the Dr. Julius Kugy monument and made sure to rub his knuckle for good luck. 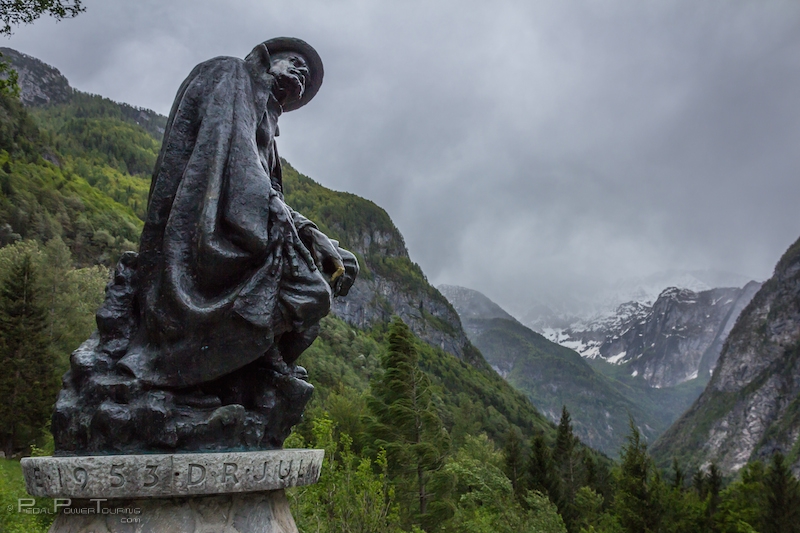 Dr. Julius Kugy was a mountaineer and writer. 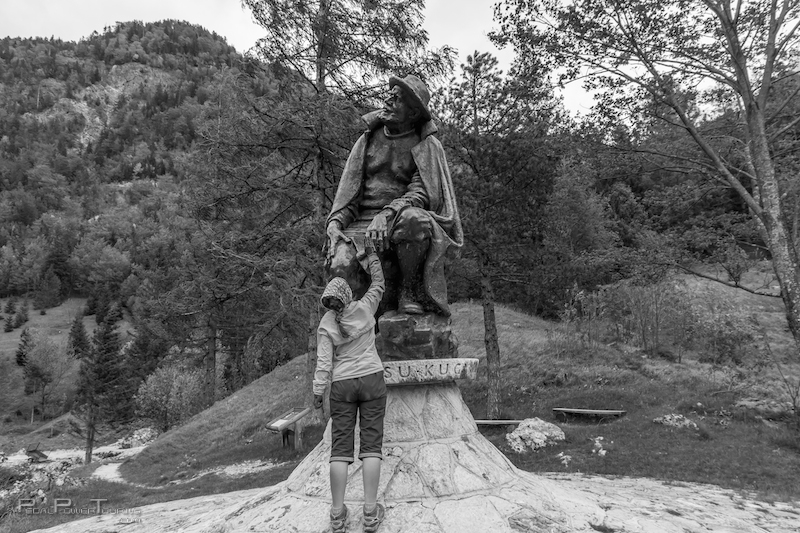 Rub the finger for good luck

Every so many switchbacks, we took a short break to soak in the mountain views… and of course for me to catch my breath. 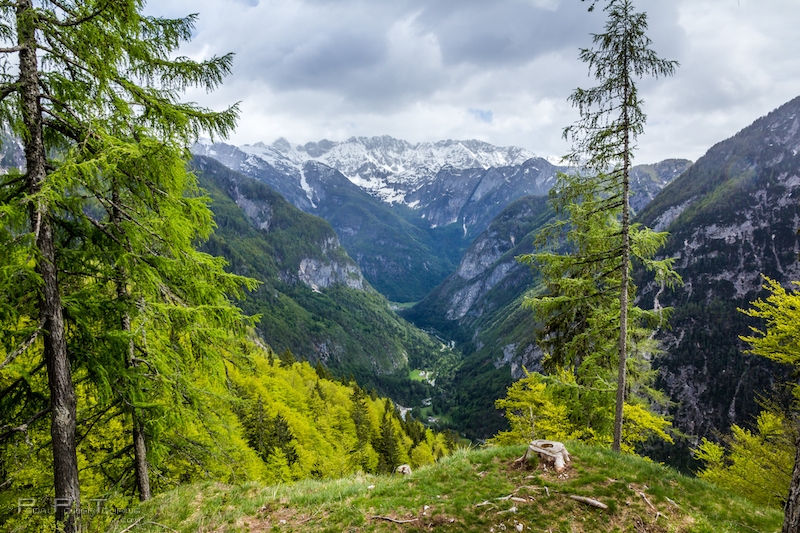 Almost at the top, only 3km to go!

As we were getting closer to the summit of the pass, the wind picked up again. At one point an unexpected wind-gust almost made me run off the road, another time it stopped me and almost pushed me back down the mountain. That’s when I decided I am better off pushing my bike for the last 1 or so kilometers until I reached the summit.

To top it off, it started flurrying and the temperature sank below freezing. When we finally reached the summit, we were cold and sweating. We stopped to put on more clothing and our gloves to stay warm before hitting the downhill. 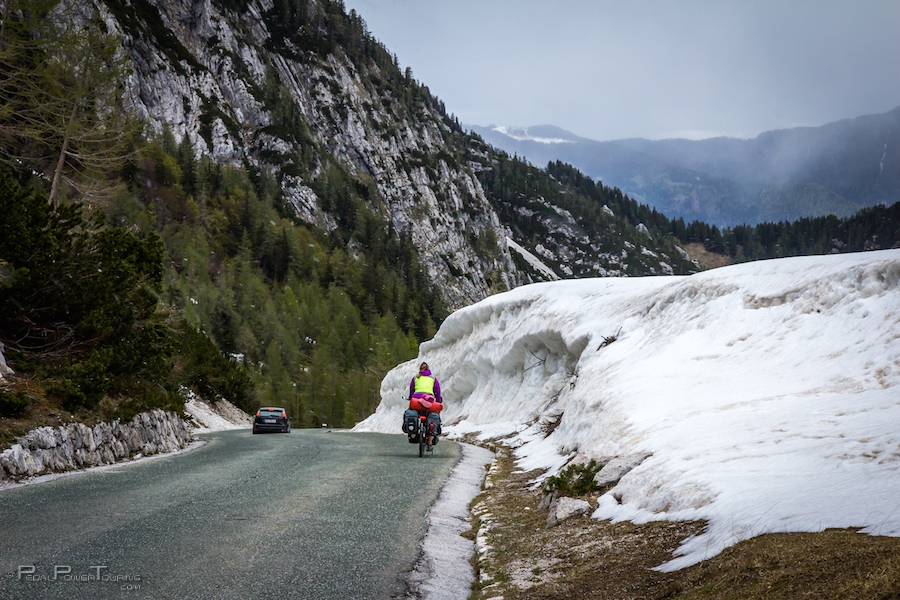 It took us longer than usual to make it back down the mountain. The many steep and sharp switchbacks along with the cold temperatures had a way of slowing us down. 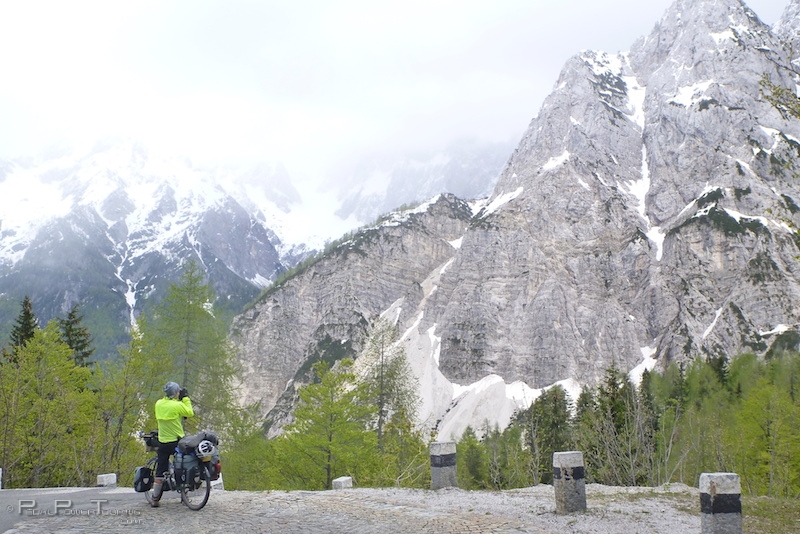 The rocky mountains are spectacular

Not to mention, that we stopped a few times to admire the majestic mountains on our ride down. Seriously, our photos do not any justice to the beauty of this area.

Finally, after reaching bottom on the other side of the pass, we looked for a place to get a cup of hot coffee to warm us up and to gather our thoughts. Once, we were able to feel our fingers again we searched the Internet for directions to the nearby campground. Luckily for us, the guy running the cafe pointed us to a bike path just around the corner that led straight to the campground where we were going to stay for the night.  After a brief chat with cafe guy, we were back on our bikes and heading to our new home for the night.