Khao Sok: about hiking in the jungle and wild bathroom encounters 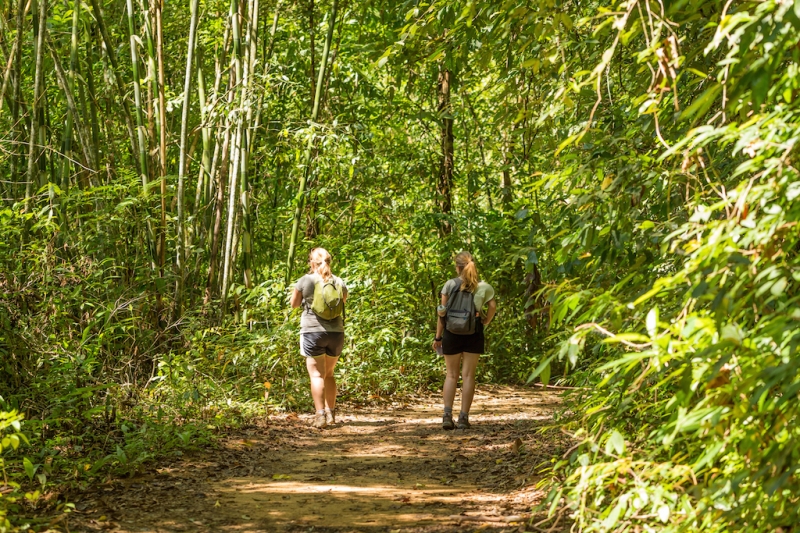 24 Nov Khao Sok: about hiking in the jungle and wild bathroom encounters

Posted at 10:25h in Thailand by Petra 0 Comments
0 Likes
Share

The park ranger was not kidding, when he warned us about rain rolling in during the night. Not only did it rain…it poured! Accompanied by lightning and thunder. As the storm moved in closer, we moved over into the covered area of the park’s restaurant to wait out the worst of the storm. Luckily, it did not take long for the thunder and lightning to pass and we returned back to our tents. Soon the sound of raindrops hitting the tarp was replaced by cicadas chirping in a chorus that sounded like an old tired ghost howling the rest of the night. 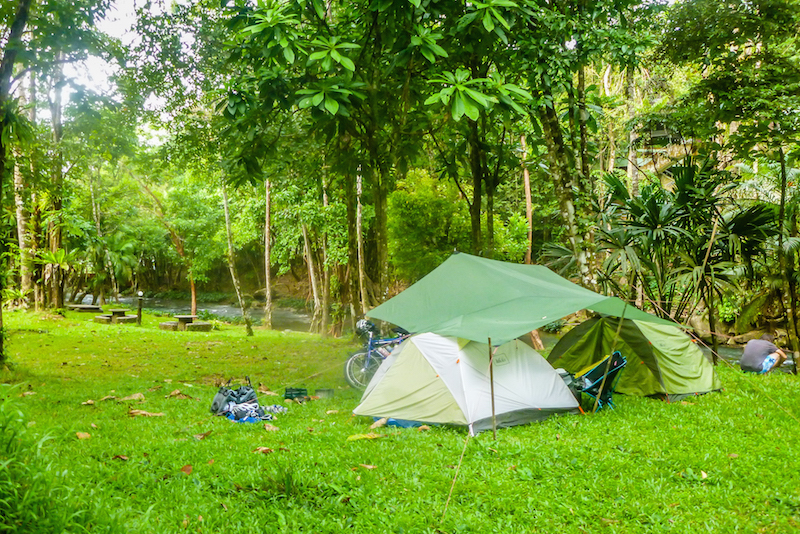 We are the lonely campers at Khao Sok National Park

In the morning, the sun peeks through the trees hitting the tent.  In no time the strong rays lift the mist from the jungle and dry out all of our gear again.

After making coffee and enjoying a cup of muesli with powdered soya milk, we head out on a hike into the Khao Sok jungle. There are two waterfalls to see on our agenda… actually the only two we are allowed to hike to by ourselves. Anywhere else in the national park, aka jungle, we can only get to with an official guide. Possibly because of the wild animals such as wild elephants, tigers, and leopards, or maybe because there has been a lot of rainfall and flash-floods are supposed to be common in the area. Either way, we are trying to be good; we stay on the path and do not go past any signs that tell us we could only proceed with a guide. Maybe the steep fine, should we fail to heed the signs are a convincing factor as well. As we hike along the dirt path, we marvel over the sheer size and variety of bamboo growing along the way. We listen to all the different crazy sounds of birds and other animals, that we are unable to spot in the lush vegetation. As we pass a sign that points to a swimming area in the river, we decide to hit the water on our way back from the hike and continue our walk toward the waterfall further away. The park brochure made it sound like a big, multi-tiered waterfall. Once we reach it though, we are a little bit disappointed since it looks more like a big rapid over a long stretch of rocks. On the other hand, we are delighted to spot a few colorful lizards and funny looking mushrooms with their caps on backwards. We turn around and head to the other waterfall, that was depicted to be smaller but more beautiful. We step off the main path and climb down a steep slope, cross a creek over a few big stones and reach the other rapids. It is not much of a waterfall either, but the area is beautiful. We decide to sit on the big rocks in the river and eat our bananas and salaccas, that we brought for snacks before continuing our hike to the swimming hole. At the swimming area along the river, we meet a couple enjoying the cool water. They tell us about several monkeys they have seen just a few yards away. Although, we are a little disappointed that we missed the monkey family, we are happy to go jump into the cool water.

Ron is the first to step into the river and while he stands and waits for the rest of us to jump in a fish comes up and nibbles on his toes. Startled he jumps up and laughs. The lady sitting at the river bank calls it the “Thai pedicure” and ensures us that the fish are harmless. I jump in and swim across the river, back and forth a couple of times, then I head back toward the bank and stand in the river with my feet buried in the sand. “Ouch” I yell, as something pinches me hard in the toe. Unable to see what just bit me, I quickly jump out of the water and see a small trickle of blood come from my toe. That’s enough of a “Thai manicure!” for me!

Jessica lost her interest in spending more time in the water as well at this point, so the two of us sit on a couple of big rocks nearby and watch Ron take pictures of insects and butterflies. Jessica had a couple of rough days lately. Getting used to riding in the heat and battling travelers diarrhea and bouts of nausea have drained her and she is ready to take a rest. So that’s what we do for the following day. We rest, get water and food supplies, eat and drink, while Ron takes lots of Macro pictures of neat little creatures.

In the evening, we decide to have dinner at the park’s restaurant, where we are some kind of a celebrity for being the only ones camping in the park…in the rain to top it off! While waiting for our meals to be served, we watch the family’s cat strut between the tables. Suddenly it jumps at something and starts playing with it. Jessica gets a better look and tells Ron: ” I think she’s got one of those bugs you were trying to find for the longest time.”

There it was, the Praying Mantis, that Ron has been searching for so long… and it’s about to become cat food.

Ron quickly jumps into action and pulls the large insect from the cat’s mouth. The bug is about 4 inches long and the wings look like leafs. It’s a little bit startled, but seemingly unharmed. Ron offers a stick to the large bug to climb onto, which it takes him up on. Then it just hangs on to the stick at our table while we eat dinner. Occasionally, we have to shoo away the cat to leave the insect alone. Yet, we manage to take the Mantis back to the camp, where Ron takes a few pictures before setting her back on a tree.

At night, the cicadas play their songs so loudly again, that we actually stuff tissue paper into our ears to be able to hear anything else. Their chirping is quite deafening and seems to bleed out any other noises. Strangely enough, we are able to hear almost anything with the tissue in our ears. At some time we notice strange noises come from the ladies bathroom. Armed with a couple of headlights, we search the premises, but are unable to find out who is responsible for the weird sounds. Instead, we spot a large lizard; a monitor is walking behind the bathrooms and quickly scurries up the steep hill behind the building once it gets wind of us. Not sure about what is living in the girls bathroom, Jessica and I decide to use the men bathroom instead. There we can at least see the giant spider behind one of the toilets, the fruit bat hanging from the ceiling, and the scorpion on the floor and we can keep an eye on them while using the squatter. 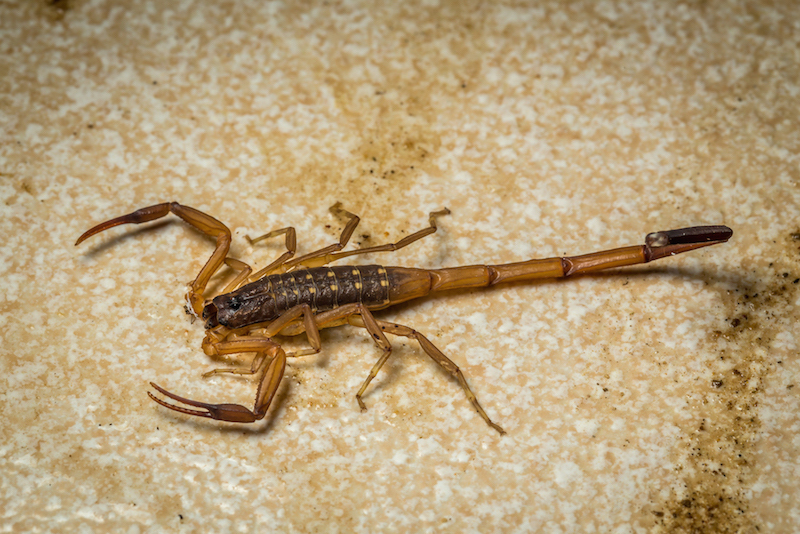 One of the many critters hanging out in the bathroom 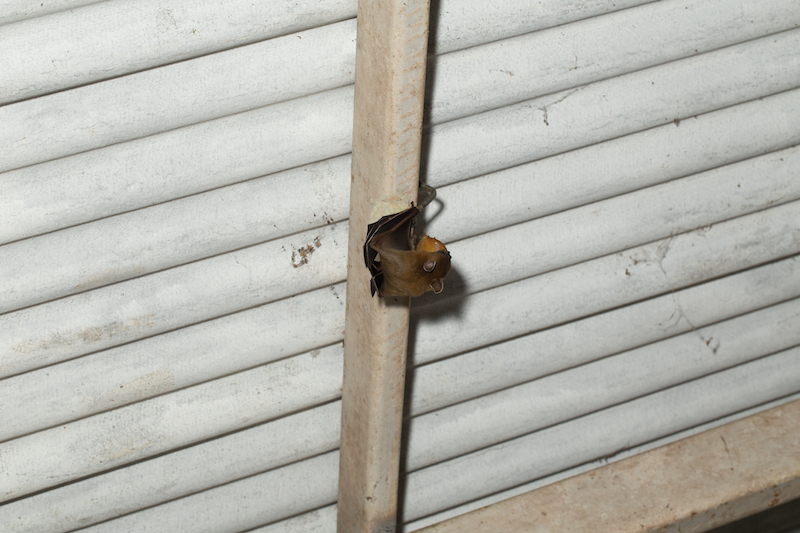 A cute bat having snacking on fruit in the bathroom

Eventually, we are all ready to crawl into our tents to go to bed. The cicadas are still playing their obnoxious songs, but we are tired and soon the chirping just turns into white noise and we fall asleep. Tomorrow, we are going to cycle about 65 km, to another area of the national park to check out Cheow Lan Lake which is contained by the Ratchaprapha Dam.