It’s been almost two months since we returned home from our European bike tour and although we haven’t posted any updates, we’ve been pretty busy. For starters, when Ron returned to work he immediately went on call for the week and one of his teammates was resigning and moving on to bigger and better things. Needless to say, the first week back to work sucked! However, on our second weekend home Ron decided to go and compete in a XC MTB race in Gainesville, FL. 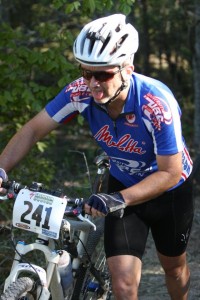 Even though it had been over 14 months since his last ride in the woods on single track, he thought it would be fun to go mix things up with the other racers. So he packed up the TDI and headed off Saturday morning for a weekend of riding in the dirt. After Saturday’s sketchy pre-ride, Ron felt it would be best for everyone (mostly him) if he dropped back one level in race categories and race in the White wave. White wave meant one less lap and less experienced racers and Ron was really concerned about his skills and not the distance. Sunday’s race went off without a hitch and although Ron did not do quite as well as he hoped, he had a blast finishing 14th out of 25 and had nearly identical lap times at 28:91 and 28:90. 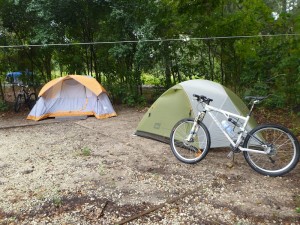 The following weekend we were invited to a birthday-camping-party at Santos Campground near Ocala, FL. The plan was to do a lot of riding in the woods, then drink lots of beer Saturday night, get up Sunday and do a lot more riding! Well, like all great plans, sometimes they just do not pan out like you want. Unfortunately for us, there was a tropical storm just off the coast and it poured on us all day and night. 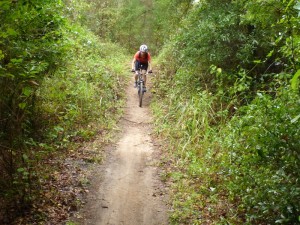 Petra getting her single track riding on!

Although it rained pretty much nonstop we still got out and rode our bikes in the mud and everyone was having a blast. After about 15 miles we called it quits and headed back to camp for food and beer. After a great night of hanging out with friends, it was time to hit the sack. Sunday we awoke to more rain and decided against more riding, so we packed up camp and headed home. 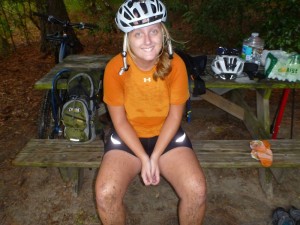 Jessica is smiling, so it must be fun!

After this Ron went on call every other week, so work has really slowed down our weekend adventures; however, we’re confident things will get back to normal at his job eventually and we’ll get back into our routine of overnighters and weekenders. In the meantime, we just continue to commute to and from work and try to get in a fun ride when we can.